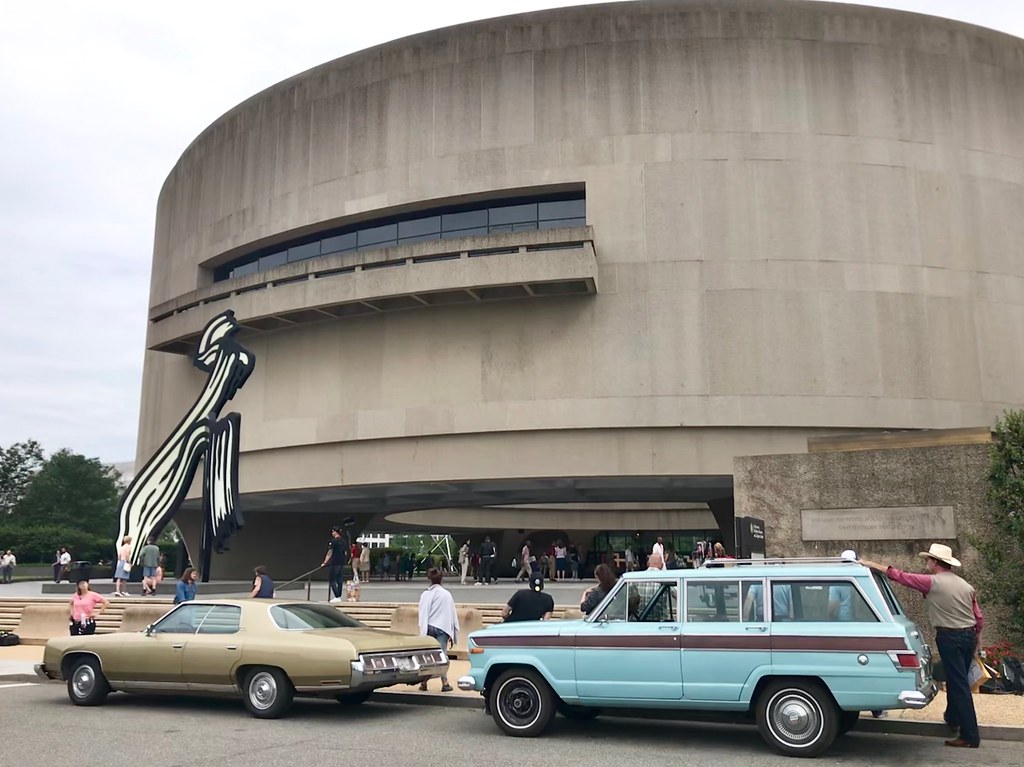 Wonder Woman is filming in Washington this week. If you go by one of the locations (the Hirshhorn Museum, Watergate, Georgetown) the PAs will tell you that it’s Magic Hour. But everyone in DC knows that it’s Wonder Woman.

“No photos!” comes a cry from behind a barricade as iPhones rise to catch the irresistible sight of 1980s cars and fashion on the National Mall. In June. On a Friday.

Despite the legally unenforcible prohibition, images from the movie have been all over the Internet. Twitter even made it one of its Moments.

Seeing photos online, I hurried down to catch the shoot at the Hirshhorn Museum.

Movie-making is frightfully dull unless you’re the one making the movie. I wrote screenplays for a while and was even on set for a couple of short films.

It can take all afternoon just to get the lights set up. 99% of the time, nothing is happening, just extras in wigs and costumes listlessly standing around, waiting for their chance to be a blur in the background.

My timing was propitious, biking up just as Wonder Woman/Magic Hour was rehearsing a scene.

No. It was her stand-in and Chris Pine’s stand-in looking so similar to the two actors that I had to zoom in on their faces to confirm that they were nobody.

The stand-ins were acting now, walking where Gal Gadot and Chris Pine would be, and acting too, the Pine stand-in reacting to something overhead. Walk, talk, react as the camera whirred and cars from the 80s idled past the museum.

And then again, the old cars reversing, the stand-ins returning to shadow and the extras relaxing in their bright 80s clothes. Whatever…

Again, the cars idled forward, the stand-ins took their marks, and the extras tried to look natural.

Life in DC, 2018, resumed. Drivers from down the street honked, annoyed at being delayed. High school tour groups, clad in identical green shirts, trooped by, unaware of the movie shoot. PAs told joggers to cross the street. “The sidewalk is closed!”

And then, looking through my zoom lens, there was Gal Gadot and Chris Pine, wearing the same clothes as the stand-ins, even a Member’s Only jacket for Steve Trevor, but anointed with the familiarity of being stars. You know them, but you don’t, their image the only thing truly accessible.

They duplicated what the stand-ins did. Walk, talk, react, Chris Pine gawking at whatever was in the sky but with considerable more subtlety than the stand-in. He’s a star.

A dirty hippy ruined my shot. Old man, in a tie-die shirt and blue overalls, entering the frame just as I focused on Pine and Gadot.

Everyone relaxed, Gadot crossing the concrete plaza to consult with Patty Jenkins, the director. That’s the conversation I would’ve loved to hear.

I love the fact that they used the Hirshhorn, as well as several other DC locations. They also recreated Commander Salamander in Georgetown, a mainstay of 1980s cool when the 80s were cool.

What wasn’t so cool was Magic Hour/Wonder Woman shutting down Pennsylvania Avenue all weekend long, blocking off bike lanes (it’s always about bikes) with no alternate accommodations. Instead, confused foreign tourists, groups on Segways, bikes and cars crammed into narrow streets trying to detour around the blocks-long bottleneck.

There weren’t even detour signs for the lost. Instead, just fences and people with ill-defined authority telling them to leave and “NO PHOTOS!”

But to help the filmmakers, the DC city government had erected barricades, parked dump trucks and even brought in police officers to keep the curious away. Money talks, in the non-superhero universe.

Meanwhile, a few blocks away, the DC Department of Transportation (DDOT) had finished their reconstruction/destruction of the 15th St bike lane by the old Washington Post building. It had been a protected bike lane until it was destroyed to enable a private developer to construct a building. The biking residents of the city (like me) have endured years of dodging cement trucks and cranes so that a rich man can get richer.

I biked by. All the resources of the city were handed to the Wonder Woman filmmakers. But, on 15th St, DDOT couldn’t even be bothered to put up a barrier of plastic bollards. Instead, the only protection from cars is a narrow strip of paint for this two-way bike lane. There will be chaos and injury come Monday. 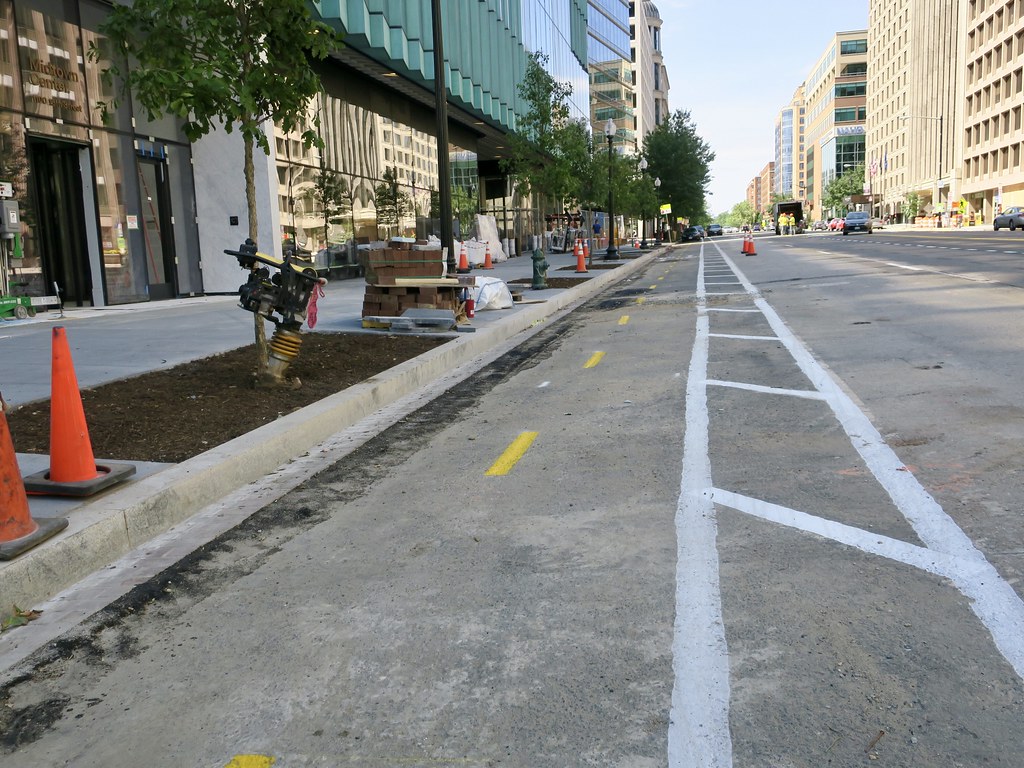 But that doesn’t matter to Mayor Bowser and a city government entranced by Hollywood fame. They’ll block off entire streets for an imaginary character but do little for the real people of the city, forced to beg for a few pieces of plastic protection from very real dangers.

In the movies, Wonder Woman stands up for the oppressed. But in real life, there are no superheroes. If you have money, Mayor Bowser and the city government will let you do what you want.