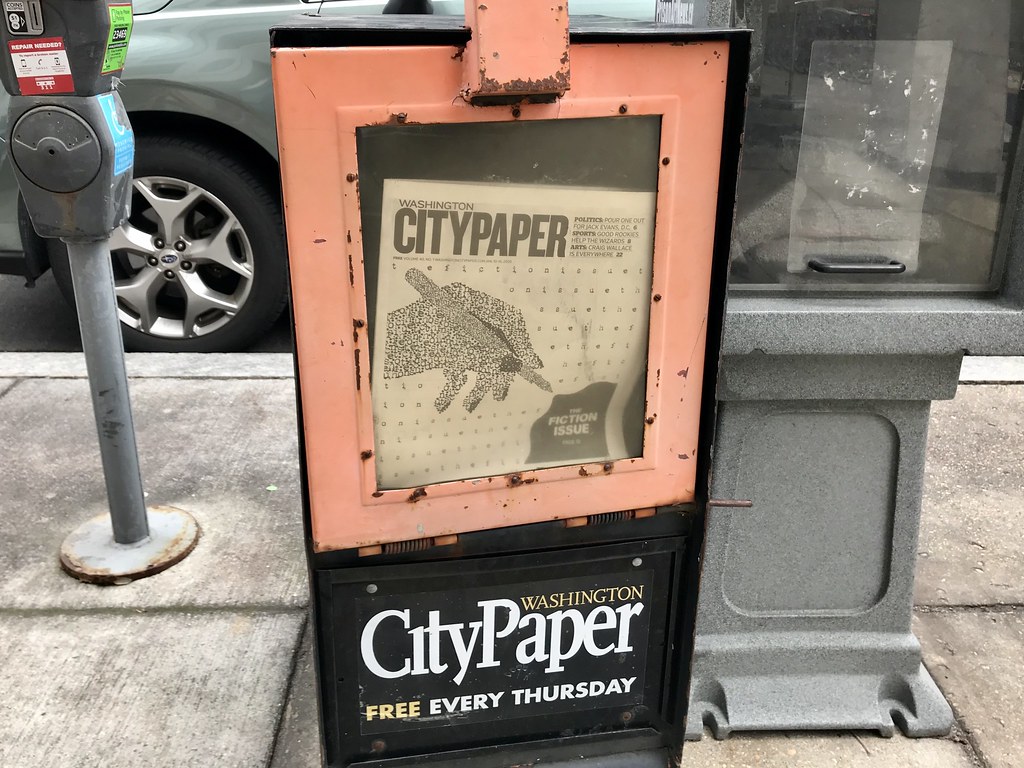 On April Fool’s Day 2022, the Washington City Paper announced that they would no longer publish a weekly print edition.

To me, the City Paper was urban life. When I came to Washington, this alternative free weekly was one of the things that defined the city, along with the Metro and the museums, none of which were available in my Florida homeland.

The City Paper of the 1990s had it all! In its black and white pages, you could find the latest Marion Barry scandals, record reviews, an events calendar and pages of classified ads for apartments, yard sales and adult services.

Plus, amazing long-form journalism by writers such as Eddie Dean, who profiled overlooked corners of the city, like taxi drivers in Anacostia. He wrote about the gritty, pre-gentrification city and the people who lived there. These were fascinating, novelistic portrayals of DC beyond the monuments and they had a huge influence on my own writing.

Inspired by the City Paper

In 2017, I won the City Paper Fiction Competition with my short story, Victory Party, which is about the election night 2016 in DC. I got to see my work in print, online and had a reading at Kramerbooks – the thrill of a lifetime, all thanks to the City Paper.

A couple years later, I won the competition again, with Apartment 101, which is about three decades of life in one apartment. You can see the City Paper influence in my short story, which has lots of local detail and is about a DC far from the monuments.

What made the City Paper unique and different was that it published in print. Paper – the ultimate app for reading. While our digital devices constantly serve up distraction, words on paper demand our attention. You can’t multitask while reading a book.

Also, print has an authority that digital cannot match. On the Internet, everyone is equal. You can make your crackpot blog look as authoritative as the New York Times. But not everyone can afford to maintain a printing press and a distribution network.

I’ve seen my short stories published online before. But seeing them in print in the City Paper was qualitatively different. They were actual physical objects in the world, compared to transient pixels.

I say all of this as a person who has spent their career working in digital media. I’ve managed web sites, published email newsletters and gone viral on social media yet none of it compares to the in-your-hands reality of a newspaper, book or magazine.

After forty years in print, the City Paper has given all that up. No longer will you be able to find them in a stack at Kramerbooks or pull one out of a box on your way to the Metro. No more getting your fingers dirty with ink while engrossed in a story at Zorba’s. No more thrill of seeing your words on a printed page.

Instead, the City Paper is going to be just another web site.