The Old Post Office is one of the loveliest buildings in Washington, DC. Built in 1899, this brawny Romanesque structure dominates Pennsylvania Avenue between the White House and the Capitol.

If you lived in DC in the 1990s, then you remember it as a food court that would fill with high school tour groups during the summer. With a glass skylight a dozen stories up, the food court was loud and chaotic but convenient to the museums on the National Mall.

You could also take an elevator up the clock tower to get a wonderful view of the Washington Monument, so close that it looked like you could reach out and touch it. Run by the National Park Service, it was free and there usually wasn’t much of a wait.

When the food court era ended, the General Services Administration (GSA) looked for a tenant for this unwieldy and aging property.

That tenant was Donald Trump. The reality show star promised to transform the historic property into a five-star hotel.

Instead, he turned it into a garish palace for corrupt, insider dealings. A marble floor was put over the old food court, the railings and bannisters were gilded with gold leaf and crystal chandeliers hung from the rafters. The Trump International Hotel opened in September 2016. 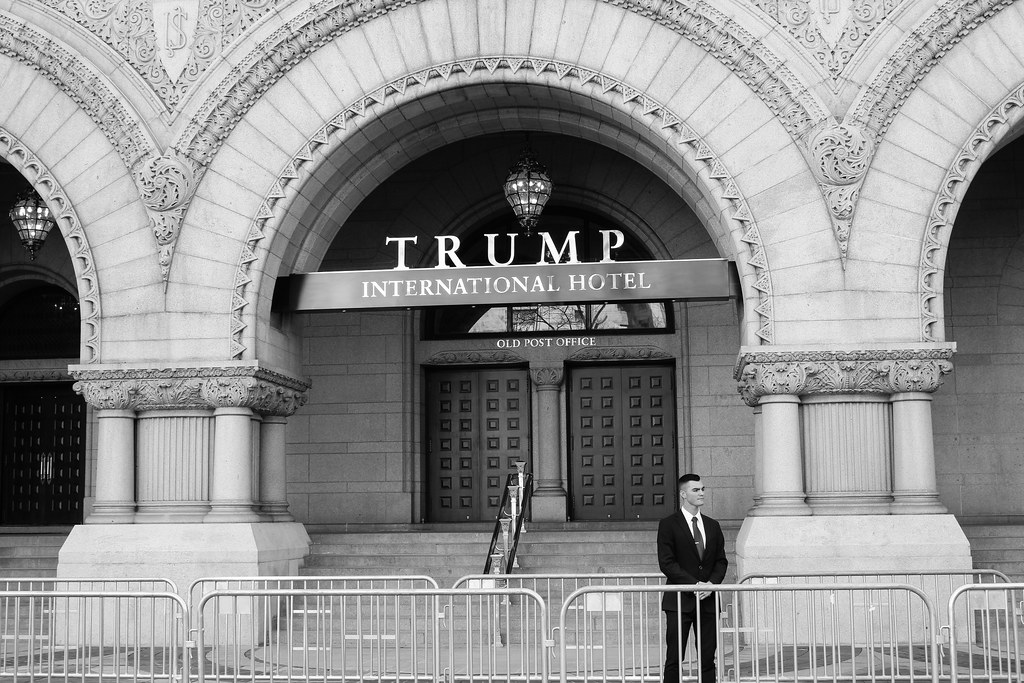 For people who lived in DC, it became a joke, a place for wealthy rubes to be fleeced by the Trump crime family.

More seriously, the  Trump International Hotel became how corporations and foreign governments paid off the President, paying inflated room rates in exchange for access. It also became infamous for the many conspiracies hatched in the lobby by people like Rudy Giuliani.

In the early days of his administration (2017), if you were of the right complexion, it was not difficult to get inside and have a look around. The lobby was like the 1980s – marble floors, overstuffed couches, chairs with gold trim. It was still a massive atrium, so it was cold and the acoustics were terrible. You had to shout just to have a conversation.

The hotel soon became a center of protest against the Trump Administration. You might not to be able to get near the White House, but you could go right up to the Trump Hotel. Everyone came to protest, from people against Trump’s rump health care plan to women making out for LGBT rights.

The hotel originally had an outdoor cafe, but guests were jeered by demonstrators so that was eliminated. With a prime location on Pennsylvania Avenue, the hotel and its faux gold Trump sign were perfect to get a selfie of yourself gagging. By the end of his administration, the Trump International was ringed by fences and guards to keep it safe.

Today, DC got the Old Post Office back. Trump sold his lease to Hilton, which will turn the hotel into a Waldorf Astoria. A place with real class, not gold-trimmed banisters.

The first thing Hilton did last night was to remove the Trump name. I biked down early in the morning hoping to see it blasted off the Old Post Office. But they did that before dawn, perhaps to avoid the cheering crowds which would have showed up during the day.

I would’ve paid to pry his name off the Old Post Office. It’s a beautiful building that belongs to the public and should never have been the plaything of a tyrant.

His name no longer defiles Pennsylvania Avenue. The symbol of misrule is gone. A small victory, but a victory nonetheless.