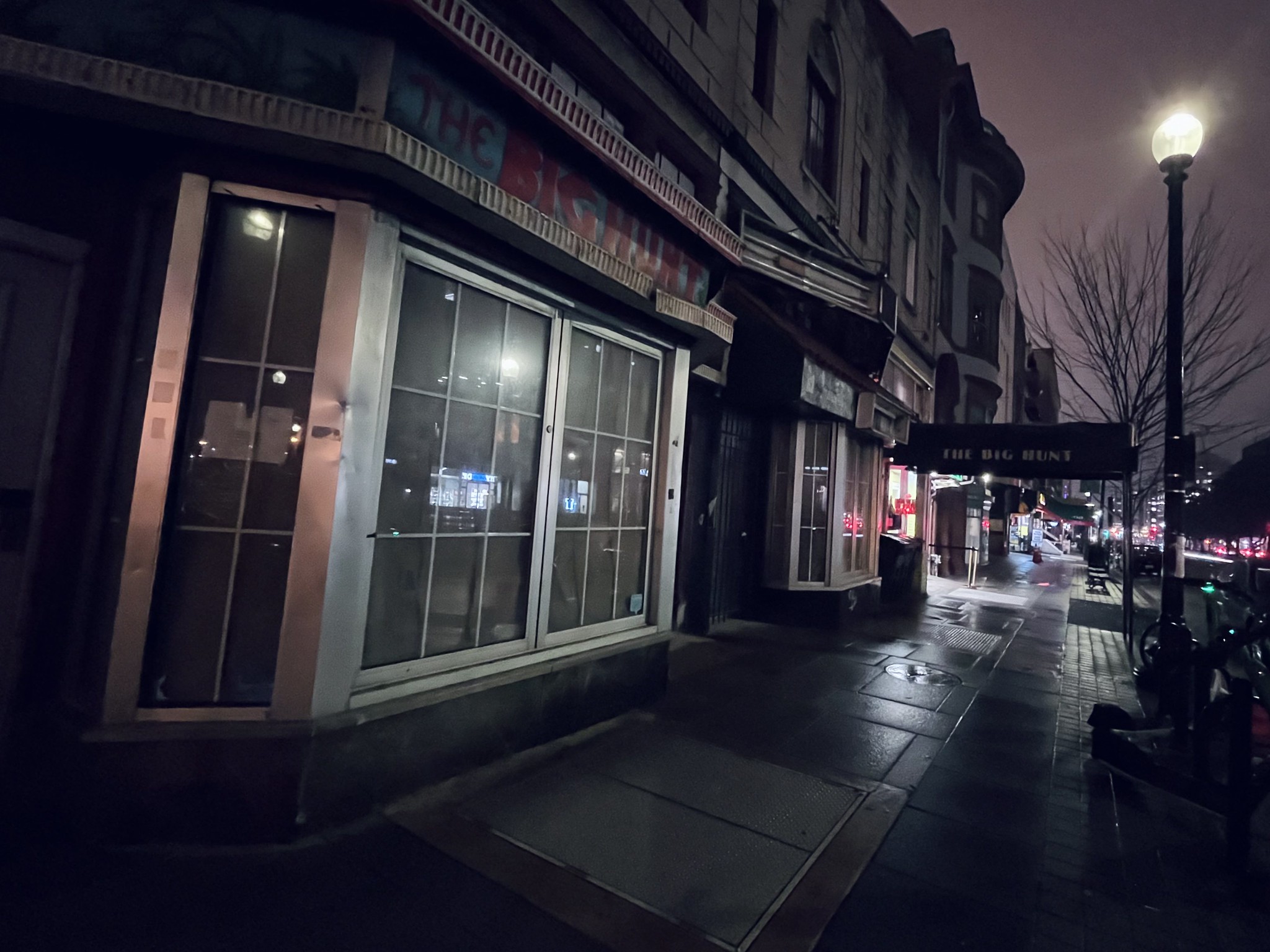 Recently, they got takeout from Ghostburger, a pop-up burger joint near the Convention Center.

If they went a few blocks west, they could’ve visited a real ghost: The Big Hunt.

This used to be a mainstay of the downtown bar scene, filled for happy hour during the week and for football on the weekends. It was a grungy, 90s-era place decked in a fake safari motif, with jungle murals painted on the walls and tiki torches.

Sprawling over multiple levels, it had a basement with a low ceiling where I once went to an epic Halloween party. Another time, I got dragged down there to see burlesque – one of those happy chaotic moments you’d find at the Big Hunt.

It was not slick, it was not polished, it was wonderful.

And unfortunately it closed during the Covid Shutdowns of 2020, giving up their lease in October of that year.

Yet, like a ghost, it lingers on Connecticut Avenue, their unlit sign facing the  busy street. Peer in the window and it looks the same, though battered and neglected, almost as if you could wipe down the counters and start serving beer again.

Covid accelerated trends which were already in effect, sending DC’s nightlife east to 14th Street. And sending its white-collar workforce remote. The offices that went sent dozens of young staffers to the Big Hunt for birthday parties and going-away celebrations are empty most of the week.

Mayor Bowser aims to change that. She wants the feds back downtown. The new Republican Congress wants federal workers back at their desks, too. People in the rest of the country are probably puzzled why DC is still remote.

I recently started a new government contractor job. Everything was remote, including the orientation. Gone are the days where you dress up for your first day of work, meet your coworkers and go to lunch. Instead, you login to your computer and get to work.

Which was fine by me, a seasoned professional, but if I was just starting out, I would feel very disconnected. What’s the point of working in a city if you’re not in a city?

Human contact is important and new workers are being cheated out of the downtown experience, that close collision of people and ideas, often fueled by alcohol.

Not that I want to return. I’ve had my fun. But I wouldn’t begrudge others the chance to connect with peers, coworkers and friends, to build meaningful and engaging moments. That in-person exposure to new experiences is how growth occurs.

The Big Hunt is a ghost on Connecticut Avenue, a reminder what was lost and is still missing three years after covid struck Washington, DC.

One thought on “The Big Hunt is a Ghost”