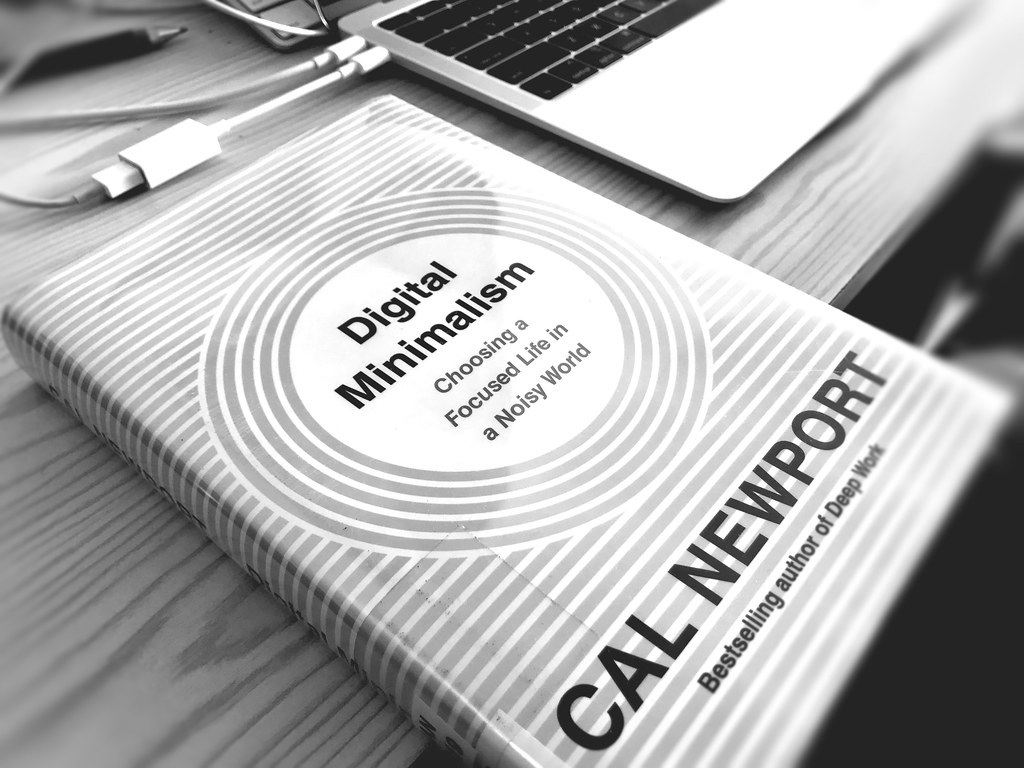 Digital Minimalism by Cal Newport is a call for the intentional use of social media, controlling it rather than letting it control you.

Social media is the tobacco of our age, an addictive product that consumers are almost powerless to resist. How can you fight against a corporation using the top engineers in the world to turn you into a digital lab rat?

An avid non-user of social media, Newport offers solutions in Digital Minimalism, ranging from the practical to the absolute.

One of the most radical is to take a 30 day break from social media. Log off. Delete the services from your phone. Block them on your computer. Then figure out what to do with your free time, like going to the gym or taking up pottery. After thirty days, consider in a very deliberate manner what services you want back in your life.

He takes another idea from the Amish, who are not as techno-phobic as they appear. They adopt technology when it useful to them, such as gas generators and power tools, but only if it fits in with their commitment to be “in the world, but not of it.” The Amish example is an argument for carefully weighing the impact of new technology before you let it into your life.

Free isn’t free. For me, this was the most compelling point in Digital Minimalism. Everything has a cost, including free online services. The cost is your time. Facebook is an amoral corporation that wants to seize every minute of your day in order to serve you more ads and collect more data.

My Name is Joe Flood. I’m addicted to Twitter

The iPhone is also an anxiety-making device. I was never much of a Facebook user but I fell in love with Twitter when I first saw it at SXSW a decade ago. In the early years, it was glorious – a collection of the techno-savvy offering help, support and advice.

When I wrote my first novel, Murder in Ocean Hall, I tweeted out my progress, posting the word count as I went. The encouragement I received kept me going as I typed away in coffee shops.

Twitter in 2019 is very different. Now, it is the thing you check every morning on your iPhone to see if the world still exists. What part of the Constitution is Trump violating? How many children are being jailed on the border? Who has Mueller indicted? And what racial/sexual/political scandal is stirring up society today?

For most Americans, anxiety climbed in 2016 and then accelerated into the stratosphere, fueled in part by the device that we obsessively consult, and our Troll-in-Chief, Donald Trump.

I recently had to get the battery in my iPhone replaced. When they told me it would take three hours, I nearly sobbed. I left the Apple Store in a daze, unsure of what to do with myself without the device I used for news, entertainment, diversion and even to tell the time.

I wandered across Wisconsin Avenue and down the cobblestone streets of Georgetown, my eye draws to a garden of beautiful red roses.  Wanted to Instagram them. But I couldn’t.

I continuing walking, not knowing what I was doing or where I was going. I saw a park I had never seen before. Walking through it, I realized it was behind a public pool that I used to go to when I lived in Glover Park.

I decided I’d walk uphill to the Georgetown Library. They would have a clock there, so I would at least know the time.

In the library, I still felt antsy, checking my pocket where my iPhone should be. Barely thirty minutes had passed.

I got a novel from an author I had never read before: Bernard Cornwell. After walking down the hill, I got a sandwich and then coffee, immersing myself in the adventures of Richard Sharpe for a few hours.

I didn’t know what time it was. Didn’t know what was going on with the world. Was unaware of any likes I might have received. Instead, I had sunk into the pleasure of a tale well told.

It was the most relaxed I had felt in months. Going back to the Apple Store, I sat a table in the busy store and read, a book in front of me instead of a glowing screen, an outlier among patrons concerned only with the restoration of their electronic tablets.

A Genius emerged from the back with my iPhone.

I didn’t want it back. Wanted to stay in this quiet moment with this book forever.

He handed me the phone. I took it.

Since then, I’ve tried to be more intentional about my social media use. I carve out time to read and write. I turn off all my iPhone notifications. Try not to check Twitter during meetings. Place my phone out of reach when watching Netflix.

I’m addicted, like most Americans. I can’t imagine going 30 days without social media.

If there’s one thing I’ve learned from writer’s block, is that your brain resists commands from the ego. It doesn’t like prohibitions.

Bad habits can’t be banned; they have to be replaced with good ones.

Digital Minimalism made me realize that almost anything, even wandering the streets looking at flowers, is better for my psyche than the the bright and false world of social media.