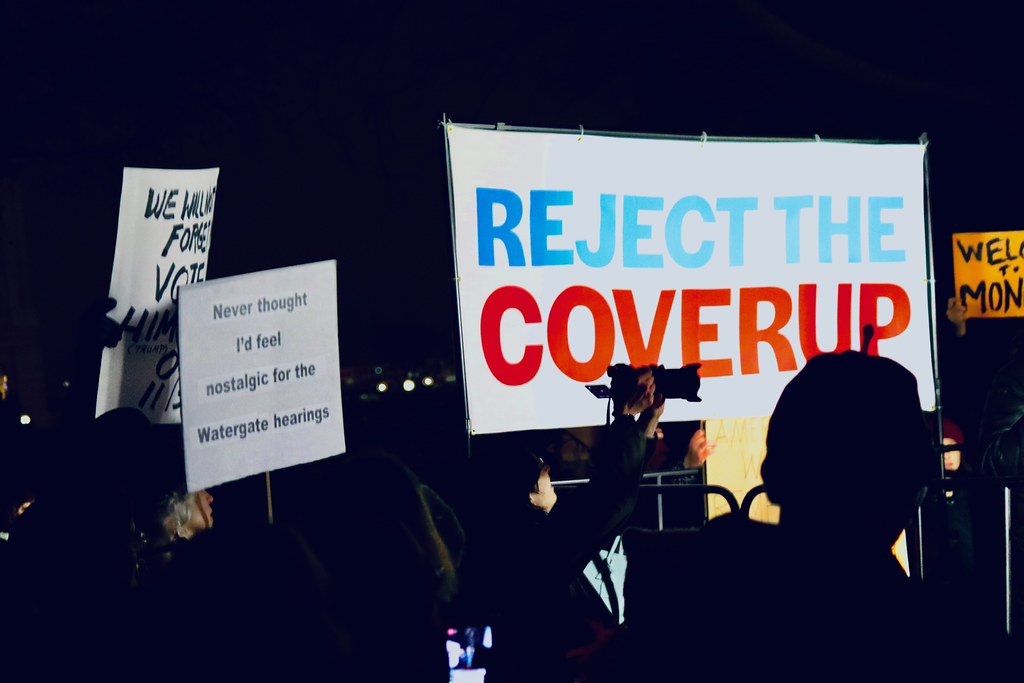 A small crowd stood in the cold outside the Capitol.

The speakers were desultory; the mood, bitter. A banner waved in the night reading, “REJECT THE COVERUP.” But the cover-up had succeeded, the Republicans admitting that Trump had blackmailed Ukraine and obstructed Congress. But they weren’t going to do anything about it.

What do you do when you lose?

You can fall back upon conspiracy theories. My favorite is that Trump has dementia. All the signs are there, from his fumbling speech to incoherent rage. You can see it in his dilated eyes, his exhaustion, his warped and twisted body language.

Yet, his handlers have managed to keep him upright through meds, makeup and camera tricks. There’s no reason to think he’ll collapse before Election Day. He must be defeated at the ballot box.

A few days after impeachment failed, Nazis marched in the streets of DC.

White nationalists shouting “RECLAIM AMERICA” through my neighborhood.
This isn’t Charlottesville.
This is Washington, DC.

They slipped into the city without notice and quick-marched to the Capitol, protected by a phalanx of DC police. They wore masks, lest they be identified and shamed. They vow to return.

This is why the election is so critical. “We’re not at fascism – yet,” one of the speakers at the Reject the Coverup rally said. Yet.

I support Elizabeth Warren but lately I’ve been drawn toward Michael Bloomberg. Why? He’s a fighter.

I’m cheered by articles about him spending lavishly and hiring the best people. So many enterprises in American life (Uber, Amazon) are built cheaply on the backs of underpaid labor. Bloomberg is willing to pay for quality.

And his ads are amazing, a slap across the face of Trump and his slavish supporters. They’re clear, direct and motivating.

Does a candidate lead the people or do the people push their representative to victory? According to Rachel Bitecofer in Politico, it’s the latter. The most motivated side wins. Candidate quality is less important.

There are no swing voters. There are no undecideds – how can you be undecided in a contest between fascism and democracy?

With impeachment failure, this may feel like the end, the gotterdammerung of the American experiment.

It isn’t. This is merely the pause before the last act. November 3 will be when this dark opera comes to a crashing end, with the voters rendering a final decision.