A tremor went through the social media world of Washington, DC – someone was slamming brunch! With anticipation, I clicked and read What the DC Brunch Says About the Young Urban Elite.

The best line in the piece by Addison Del Mastro was at the beginning:

brunch in D.C. has evolved to be little more than a way for the young urban elite (today’s yuppies) to make their messy weekends look neat, drunkenness hip, and materialistic desires something other than hedonistic.

After that highlight, the text got vague, with standard indictments of DC as being too white, too rich and too fake. Then, weirdly, a call from the highly educated author for others to skip college.

Hoping for a polemic against a Washington institution deserving mockery, I put the iPhone down in disappointment. Do you even brunch, bro? The problem with authors seeking to eviscerate DC is that they know so little of the city beyond the monuments.

As a cynical Gen Xer, long-time resident and someone who wrote a novel where I gleefully murdered millennials, I felt the article missed so much of what’s so awful about brunch.

I have the misfortune of living off 14th Street. This once-gritty corridor, home to auto repair shops by day and hookers by night, has been refashioned as a temple of conspicuous consumption for the city’s elite. Everything notorious about the strip is now gone, replaced by juiceries and micro-apartments.

A little after 1 PM on a Sunday, I saw a 20-something stumbling down the street. I was concerned. Was he sick? While DC is safer than it used to be, it’s still the kind of city where the weak are considered prey.

As he passed me, I saw. Raging drunk, in the middle of the day. The cause: brunch. Head down, in the classic intoxicated stumble, he rambled toward points unknown.

I have never liked brunch. In the morning, I want coffee and I want it now. In Kitchen Confidential, Anthony Bourdain described brunch as basically the worst:

Brunch menus are an open invitation to the cost-conscious chef, a dumping ground for the odd bits left over from Friday and Saturday nights.

Why wait in line for leftovers when all I want is coffee and a bagel?

I like things neat. I like things organized. Brunch is a mess, as sloppy and gross as a plate of runny eggs dumped on a table by a waitress who is slammed by a dozen tables of mimosa-swilling morons.

It’s not breakfast. It’s not lunch. It’s not coffee. It’s not drinking. And, yet, it’s all of those things.

There is no escape from brunch, even for someone who objects to the institution. Sometimes, you have visitors. They demand brunch and want you to find a place.

I chose Boundary Stone, because I knew it was a good neighborhood joint and blocks away from the “whoo girls” that throng 14th St.

Being GenX, we arrived promptly at 11 AM. First ones in the restaurant but the manager insisted on squeezing us all into a tiny booth, carefully packing us together like a puzzle of human parts. I was placed in such a contorted position that I left with a paralyzing backache. Within an hour, Boundary Stone was packed, with tables butting against the front door, all filled with young couples sipping Bloody Marys, some with actual babies (Addison Del Mastro thinks people in DC don’t have children).

It was fine. No, it was good. How can you not like french toast and fried chicken, even if it’s served at a time offensive to my Midwestern sensibilities? But the waiter kept pushing bottomless mimosas – “You just want one?” – confused by these strange people who didn’t want to get hammeringly drunk before noon.

We left, full and tipsy, the brunch scene a dull roar behind us. My guests were delighted, not just with Boundary Stone but also the squashed rat they saw near their car. “Flat rat!” they giggled, taking photos. Now that’s authentic DC.

Brunch is big business in this city. A friend of mine tried going to drag brunch. She was turned away. Reservations required. Imagine, having to plan ahead to get insulted by drag queens as you pick at a plate of cold eggs.

Brunch has ruined Logan Circle. On the weekends, there is virtually no escape from it. Gaggles of girls get into strange cars, mistaking them for Uber. Bros smoke as they loiter outside restaurants. Impatient couples tell hostesses how long they’ve been waiting and that they were here long before that other group!

The swarm is not limited to the streets, but ascends to the skies, to the rooftop pool of my apartment building. Once home to quiet grad students, the building has now attracted swingles who pack the pool during the summer. Vodka is consumed, Katy Perry plays and everyone gets to hear stories of terrible life decisions.

Maybe if I was a morning person, I’d like brunch better. But I really don’t want talk to you before coffee. I don’t want to be social.

But brunch is all about the social, less about the food, and more about the Instagram. It doesn’t matter that you waited an hour for pancakes. What matters is how they look. And how you look, as you craft a social media persona to make your friends back home jealous. Fabulous! So totally Sex and the City! Even if life in DC little resembles the glitzy 90s series as we devolve into a country that looks a lot like Idiocracy.

I grew up a free-range child, with formless days where I disappeared with a gang of kids to ride bikes around town (no helmets!) and play on the railroad tracks. There were no Helicopter Parents back then. We solved our own problems.

As a Gen Xer, I think you should keep your shit together.

Daylight should not see you fall out of a rolling Uber. You should not discuss boy problems with a voice loud enough for the whole pool to hear. Nor should you meet a stranger who “found” your phone – that’s a really bad idea.

Brunch is sloppy, careless and usually paid for with someone else’s money – much like millennials. It is their meal, where they take leftovers and turn them into a social media representation of joy.

I don’t blame them.

Shit is fucked up. With Trump in the White House, all of this may end in a mushroom cloud.

Let the millennials have their mimosas. Indulge the french toast. Clink champagne glasses.

Brunch, for tomorrow we die. 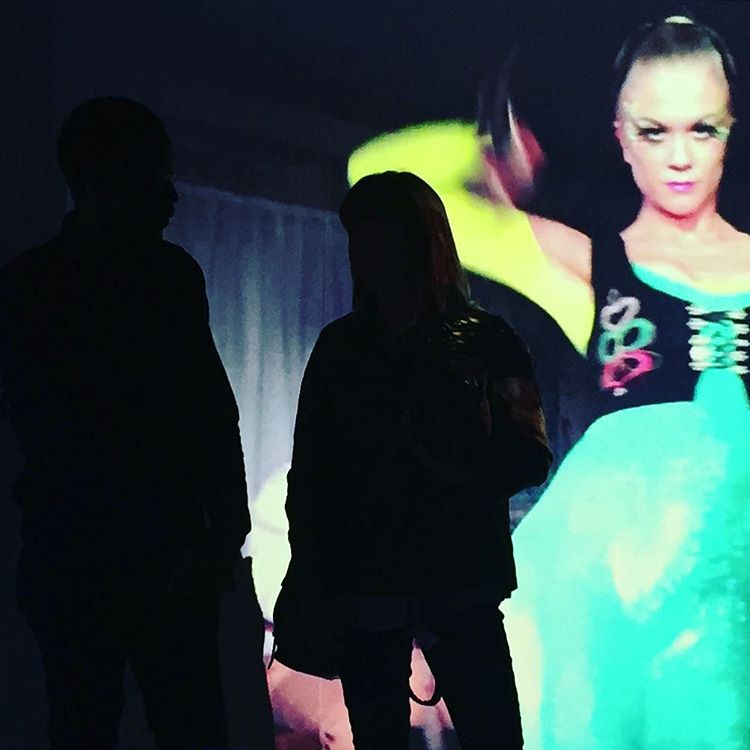 InstagramDC recently got a sneak peek at the Next Level Craft exhibit at the House of Sweden in Georgetown. This beautiful embassy along the Potomac played host to an exhibit described as:

A mythical wedding, a demonstration, a carnival, a funeral procession, a fashion show or perhaps a combination of all these? A colorful parade of mysterious creatures wander through a fictitious northern landscape carrying unique crafted objects. Who are they and where are they going?

Next Level Craft is not your typical handicraft exhibition – it has its own soundtrack and music video. The renowned young Swedish artist Aia Jüdes has created a playful and different tale of craft, mixing voguing (a modern dance style characterized by perfect, stylized hand and arm movements, acrobatic poses and flamboyant fashion), street art, high fashion, pop culture and electronic music with everything from wool embroidery, weaving and felting to root binding, wood turning and birch bark braiding.

It was a surreal experience, a room filled with bizarre objects and an ever-changing lightshow. Adding to the strangeness was a trippy video of dancing Swedes. So much weirdness for InstagramDC to photograph, as the lights cycled from red to blue.

Best of all, photography was encouraged! It’s a very forward-thinking embassy for hosting this strange exhibit and for reaching out to local photographers to cover it. We had a blast taking pictures of these unique crafts and posing for photos in the weird lighting. 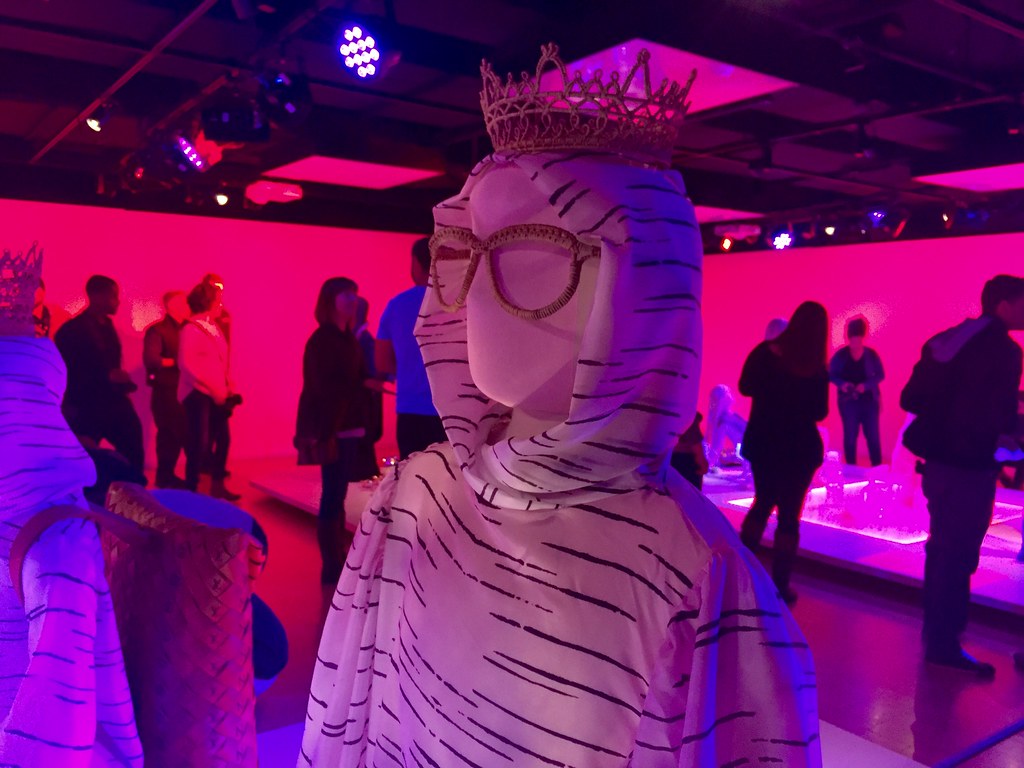 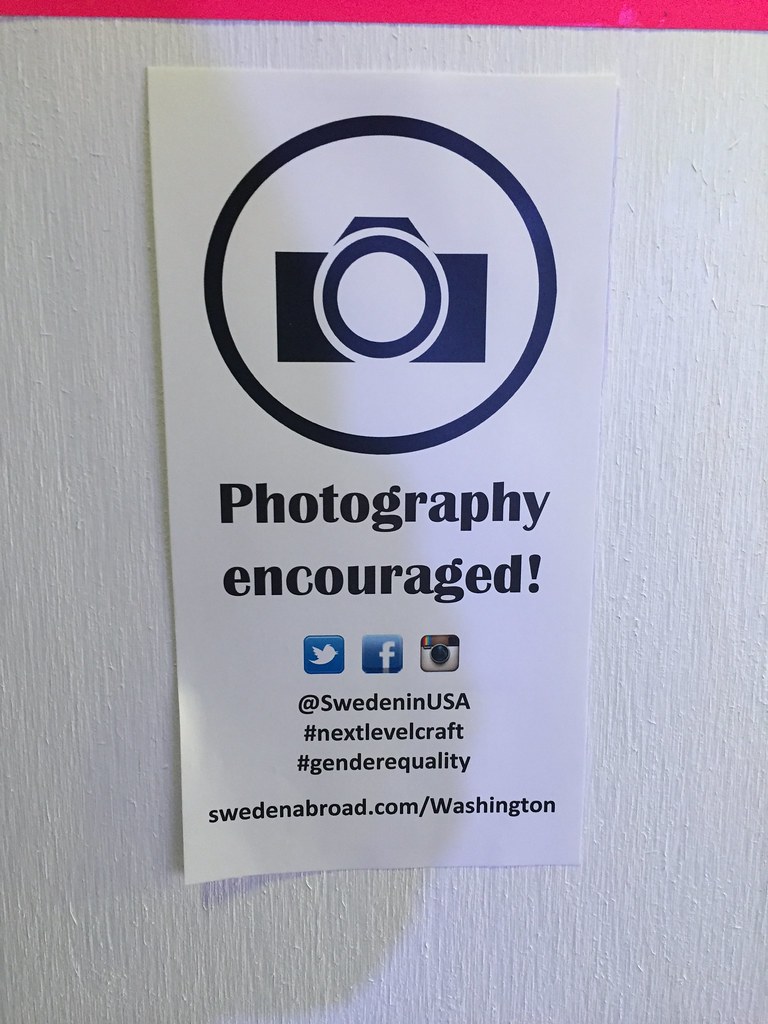 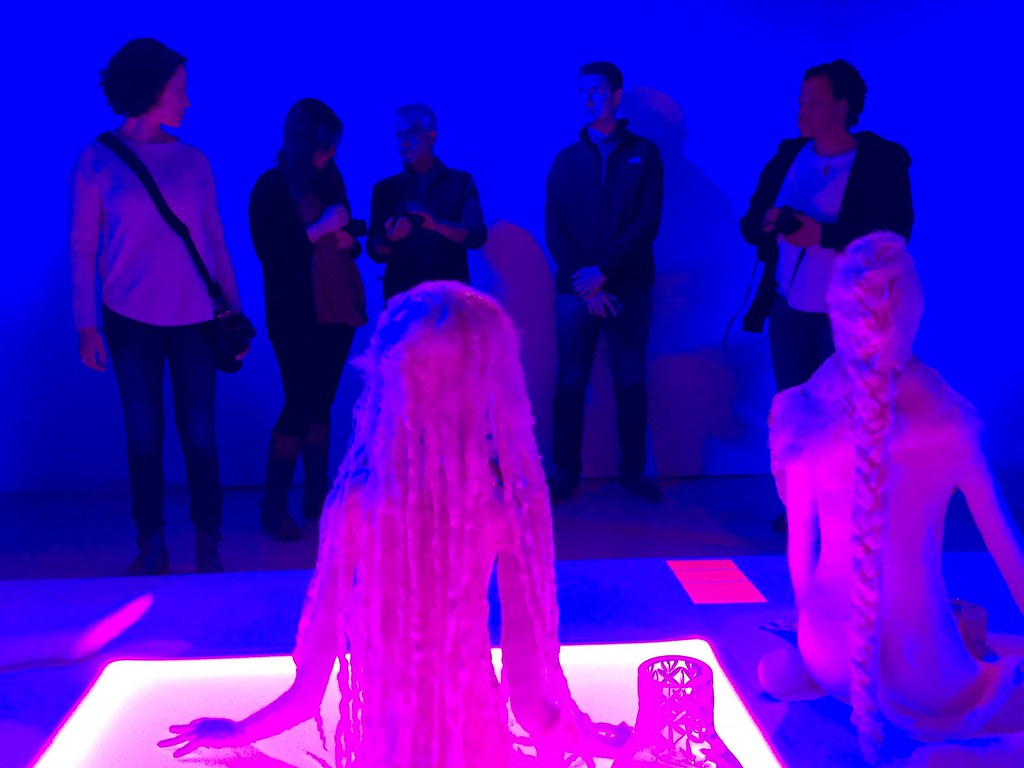 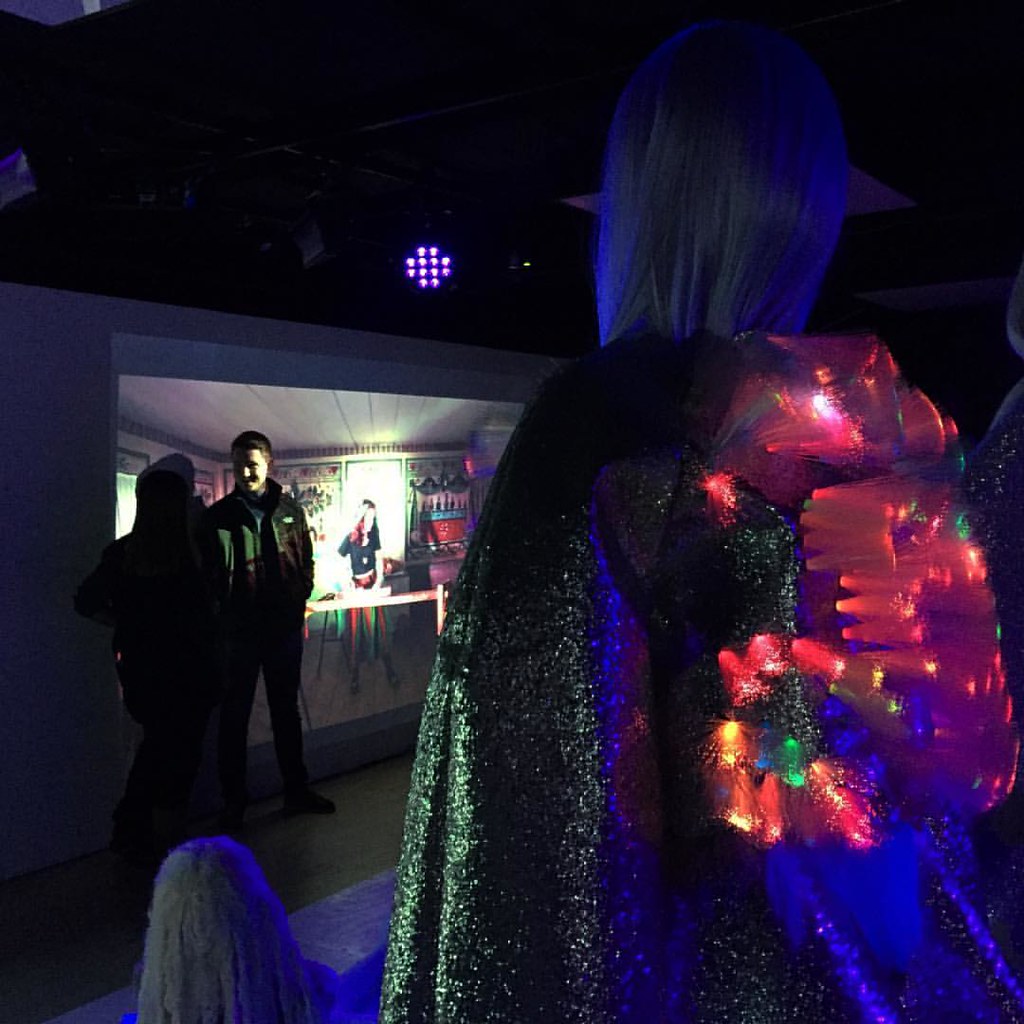 That was cool. But getting up on the roof was even cooler.

There was an amazing view of Rosslyn and the Kennedy Center, from a vantage point that few get to see. It was sleeting but no way was I going to miss this experience. 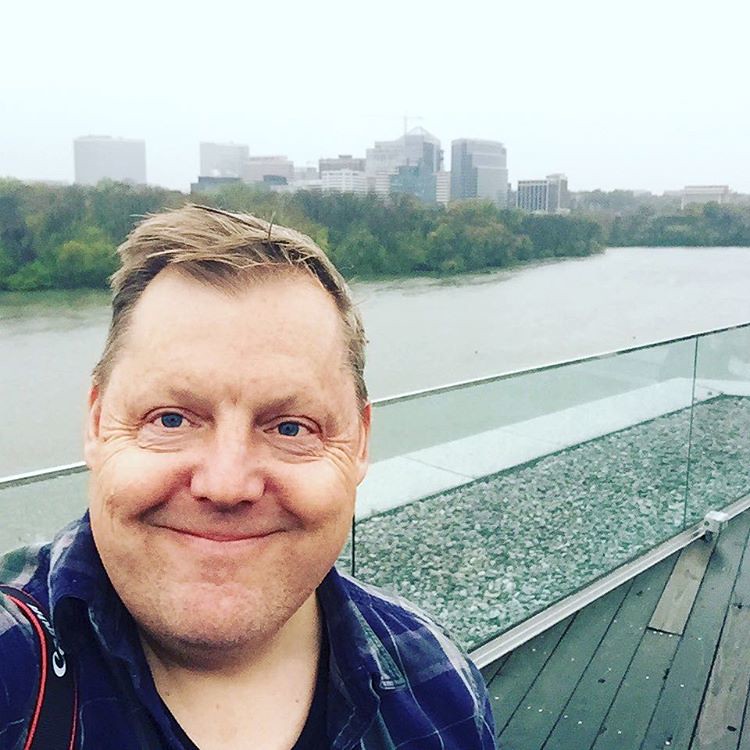 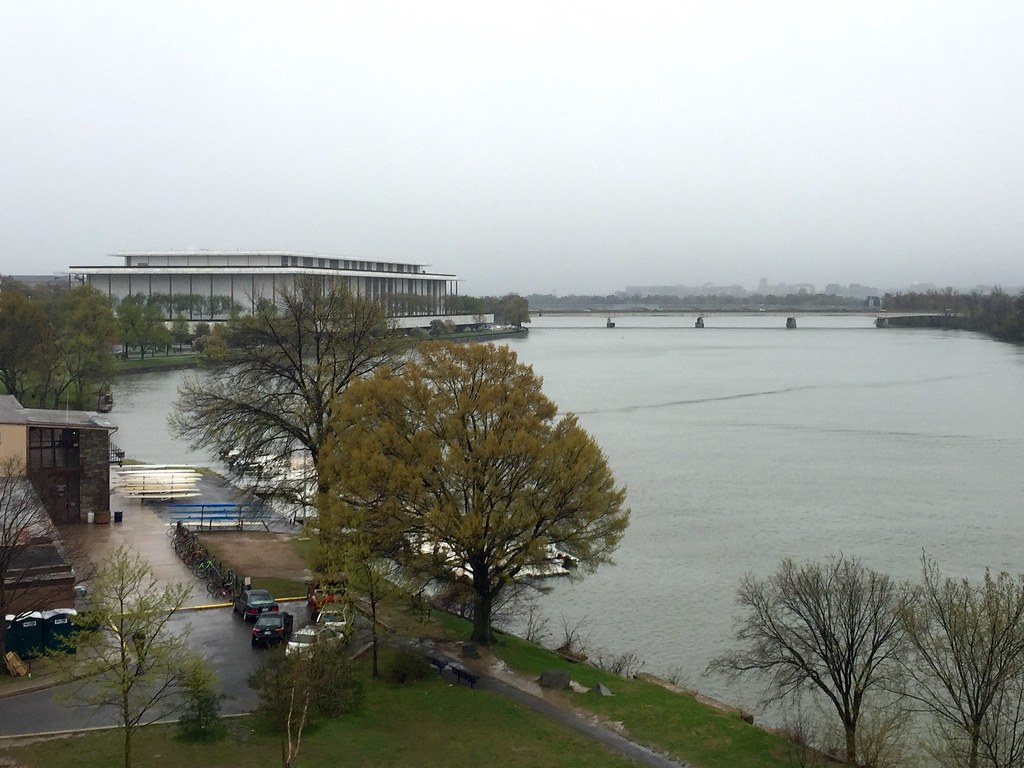 As a writer, it’s inspiring to see creative work. It’s source material for me. I wrote Murder on U Street, my novel about homicide in DC’s art scene, after having similar experiences. So don’t be surprised if a trippy Swedish art exhibit shows up in a future book 😉