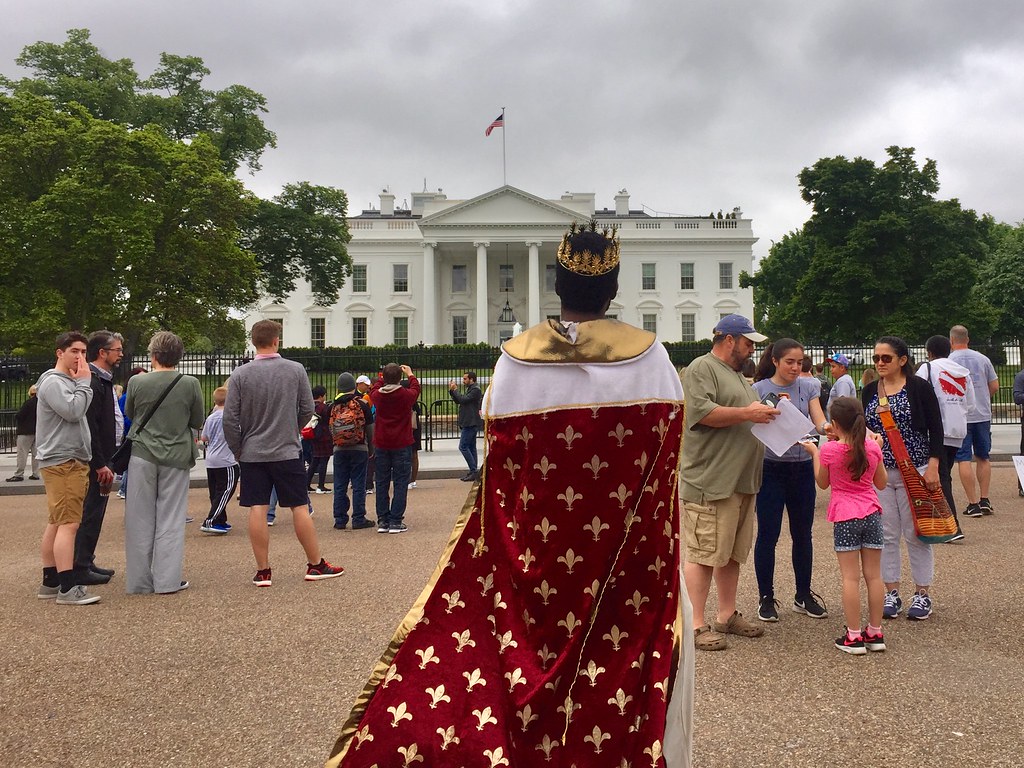 There was a moment during a recent demonstration. A crowd had gathered outside the White House to protest immigration policy. Standing in front of a chain-link fence, a young Honduran woman described fleeing the violence in her country. She loved America for saving the lives of her children. People applauded, including a 94-year old Holocaust survivor who had insisted on attending the demonstration. Stooped over, her eyes flickered with life.

At the edge of the crowd, a middle-aged couple approached, the female half in a Make America Great Again hat. They saw the demonstrators protesting Trump’s treatment of refugees. The woman snuck into the crowd and made a mocking peace sign so that her husband could get a picture. They laughed.

My friend Pippa is conducting dinners with Trump supporters. She feels that if only we all knew each other a little better, it would be easier to get along. Results have been disappointing. Breaking bread doesn’t change political opinions.

I was not a political person until this year. Living in DC, I had the opportunity to work on Capitol Hill. I declined, feeling it to be a waste of time, disliking the passion people brought to even the simplest of issues. A pragmatist at heart, I voted for Republicans and Democrats, always seeking the candidate who would do the least harm.

But Trump is different, representing an assault on democratic institutions, something that every American should oppose. Evidence is growing that he colluded with Russia, part of a Putin strategy to use fake news and select leaking to influence the 2016 election. Anders Fogh Rasmussen, the former Secretary General of NATO, warned:

“It is Russia’s aim to undermine the political cohesion in Western institutions.”

Putin seeks is to divide and weaken the West, to discredit democracy itself and restore the old Soviet Union. He wants to end the Pax Americana that has kept the world free of global wars for more seventy years. It’s a dangerous moment, as America wavers, the prospect of a new wave of conflict on the horizon. A global war would mean the end of the connected world that we know and enjoy.

Encouraging these end times is a selfish con man, Donald Trump, a dupe who is willing to go along with Putin’s schemes and court international disorder if it will benefit his family of grifters.

Trump’s supporters have told me that he can do whatever he wants, because he is the President. They’re willing to throw away the Constitution and their own hard-won democratic rights in pursuit of vengeance against people like me. “We suffered under Obama. Now it’s your turn,” I’m told.

After the election, I was ambivalent. I even wrote an award-winning short story about my mixed feelings, Victory Party, in which a waiter receives the election news with something approaching happiness.

But since Trump’s American Carnage speech (“That was some weird shit,” George W. Bush), it’s clear what he and his supporters want: revenge. They don’t want to build a new America; they want to punish America and are willing to work with the Russians to do so.

“Since when are you a liberal?” a friend of mine jokingly asked me. I’m liberal in the classical sense, as someone who believes in free speech and free markets. I believe in the West, in freedom from tyrants under a system where every person is equal before the law. That marks me as an enemy of the state, at least this state, for Trump and his supporters seek to turn this country into a soft dictatorship, Putin light, where an autocrat makes all the decisions, without the pesky impediments of the Constitution.

“There was a very serious effort made by Mr. Putin and his government, his organization, to interfere in major ways with our basic, fundamental democratic processes. In some quarters that would be considered an act of war.”

Who said that? Dick Cheney.

The war began last year, when Trump’s entourage colluded with Russia to subvert the election. It’s a war against democracy itself – and one that we weren’t even aware that we were fighting until recently.

No amount of gentle conversations around a candle-lit dinner table will budge the hate and envy in the hearts of Trump partisans. Sorry, Pippa! No accommodation is possible with people who would collaborate with a foreign power to snuff out democracy in America.

Trump and his Russian backers declared war on America during the last election. It’s a war that will be fought in the streets, courts, legislatures and media. The majority of the country voted against Trump. We did not choose this war. But it’s one that we must win.