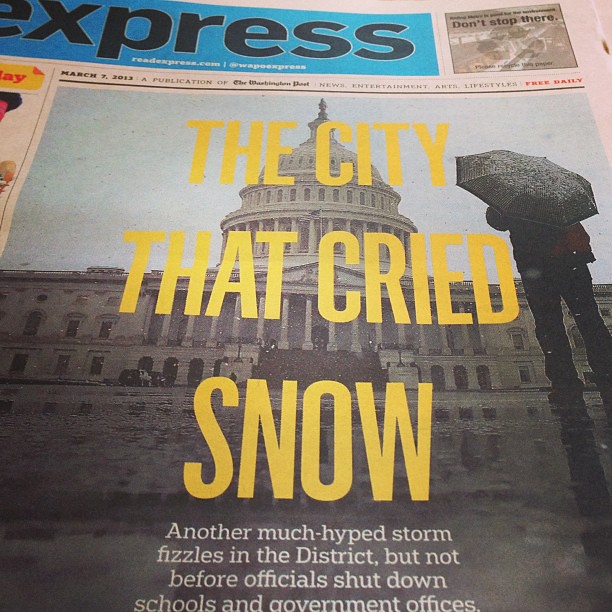 Where do book ideas come from?

In my novel The Swamp, a drone crashes into the White House, changing the course of history forever. Where did that come from? A bad weather forecast.

On this day in 2013, Washington was supposed to get an epic snow storm. There was a run on milk and toilet paper. The federal government shut down. The local TV channels suspended programs and went to wall-to-wall coverage. Jim Cantore from the Weather Channel even flew in to witness the snowy carnage.

And it rained. I watched it all day, waiting for it to turn to snow, but the precipitation remained persistently non-frozen. It was the city that cried snow, to quote the Washington Post Express.

Around 4 PM, I gave up and went to happy hour, walking deserted downtown streets to be the only customer at a bar. The weatherman on TV said that there was a layer of hot air over the city; it was snowing in the suburbs.

Layer of hot air…. If you’re a writer, this is one of those amusing details that you file away.

Ironically, I had recently started working in communications at the National Weather Service. A few months later, I had the chance to visit the Weather Forecast Office in Sterling, the office that had issued the bum forecast.

I didn’t ask them about that. Instead, I was shown how they used computer models and data displays to customize local forecasts. I was also shown a weather balloon, which carried a radiosonde designed to transmit atmospheric pressure, temperature, humidity and wind speed data.

“The Secret Service visited after we had balloon end up on the White House lawn,” a meteorologist told me. Another interesting detail, filed away.

At the same time, I was annoyed by the ever-increasing level of security theater in DC. Public spaces and parks have been stolen by the Secret Service and other agencies in the name of security. The perimeter around the White House expands ever outward, seizing Lafayette Park to the north and the Ellipse to the south, grand public spaces that are routinely closed off. This is done despite the Secret Service’s failure to prevent fence jumpers and other miscreants.

Then, in 2015, a man crashed a drone into the White House in what was described as a drunken lark. It made a mockery of security theater. How can you keep the President safe in the age of the drone? Another interesting detail.

If you’re a writer, you constantly collect information – even if you don’t realize it, filing away interesting stories and amusing incidents for future use.

Write What You Know

I had a recently finished writing a mystery novel, Murder on U Street. It’s a dark comedy in which I kill off hipsters.

For my next book, I wanted to write a satire with a political edge, like Scoop by Evelyn Waugh.

What could I write about? The image of the drone disappearing into the night stuck with me. It would be a great way to open a book.

Write what you know. What did I know? The National Weather Service had taught me about weather forecasting and government bureaucracy. I knew security theater, for I had seen places I loved locked away by fences. And I had heard enough anti-Washington sentiment to understand that a good chunk of this country wanted this city to disappear.

So, where do book ideas come from? Putting all of these thoughts together, I had my idea for The Swamp:

A meteorologist, humiliated by a bum forecast, puts a drone into the layer of hot air over DC to measure its strength. It crashes into the White House, triggering a security scare. The nation is outraged. How can we keep the President safe from drones? By moving him, and the rest of government, out of Washington.

Now, I just had to write it.