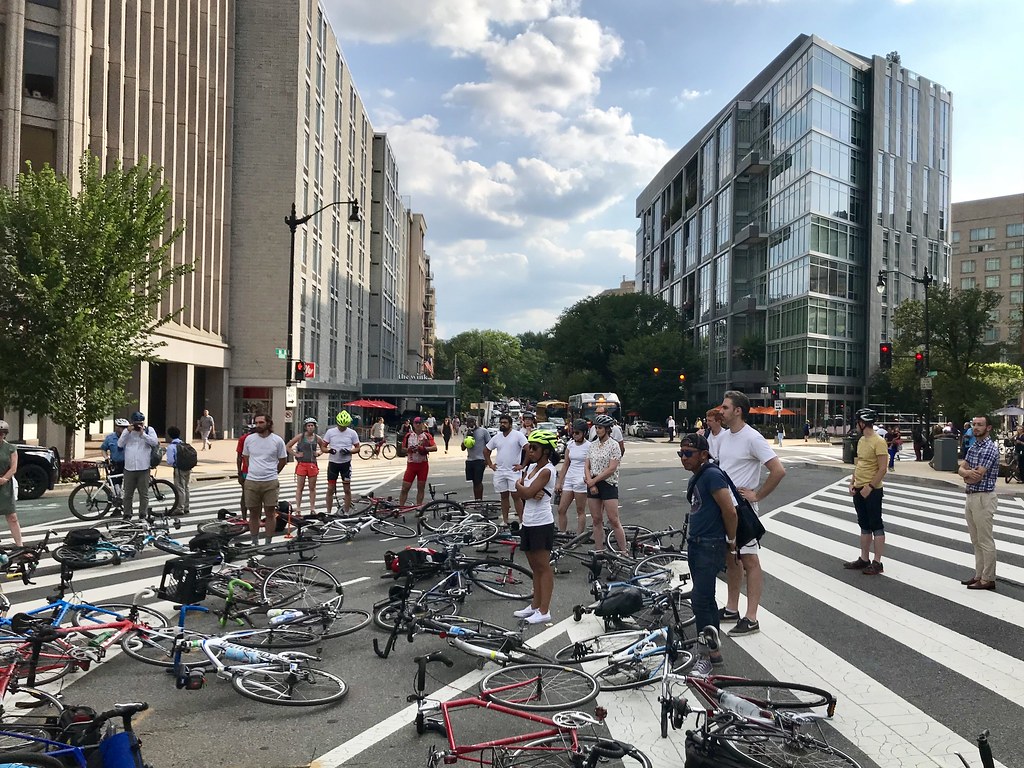 Protected bike lanes are supposed to be protected, separated from cars and protected by barriers. 15th St in Washington, DC, is a good example of one – parked cars make up the barriers and stop lights with red arrows prevent drivers from turning across the bike lane.

But the “protected” bike lane on M St created by the District Department of Transportation (DDOT) fails to include these best practices. Instead, DDOT gave in to the demands of businesses (and one local church) to design a protected bike lane that looks protected but isn’t.

The lane starts off looking protected at Thomas Circle. Running along the curb, with a row of parked cars as protection – great! But as you ride west, the lane disappears entirely as it goes by the Metropolitan AME Church, who didn’t want their double-parking parishioners inconvenienced. On the 1600 block of M St, the lane finds protection again with a line of parked cars but then ends in a mad scrum at the end of the block, as cars merge into the lane so that they can make a right turn.

This dangerous pattern of mixing cars and bikes continues on to Georgetown, where the lane sputters out. The people of #BikeDC have complained about the M St bike lane for years, telling DDOT that was unsafe, and even sharing with the transportation agency photos and videos demonstrating the danger.

Over the weekend, the inevitable happened: a cyclist was killed on M St, run over by a truck making a right turn across the bike lane. His name was Jeffrey Long.

He wasn’t even the first person on a bike killed this summer in DC, despite the Vision Zero talk about eliminating pedestrian and cyclist deaths from Mayor Bowser. In June, Malik Habib died on H St NE after being run over by a bus.

A couple days after Long’s death, I visited New Hampshire and M St NW, where he was killed. I expected to see physical changes to the intersection, such as a red light arrow to keep drivers from crossing paths with cyclists. After all, someone died here.

Nothing had been done, at least by DDOT.

But someone had been busy. Six toilet plungers painted orange had been placed on M St, preventing drivers from cutting the corner on to New Hampshire. Instead, they had to slow down and make a 90 degree turn, making the intersection safer for pedestrians and cyclists. 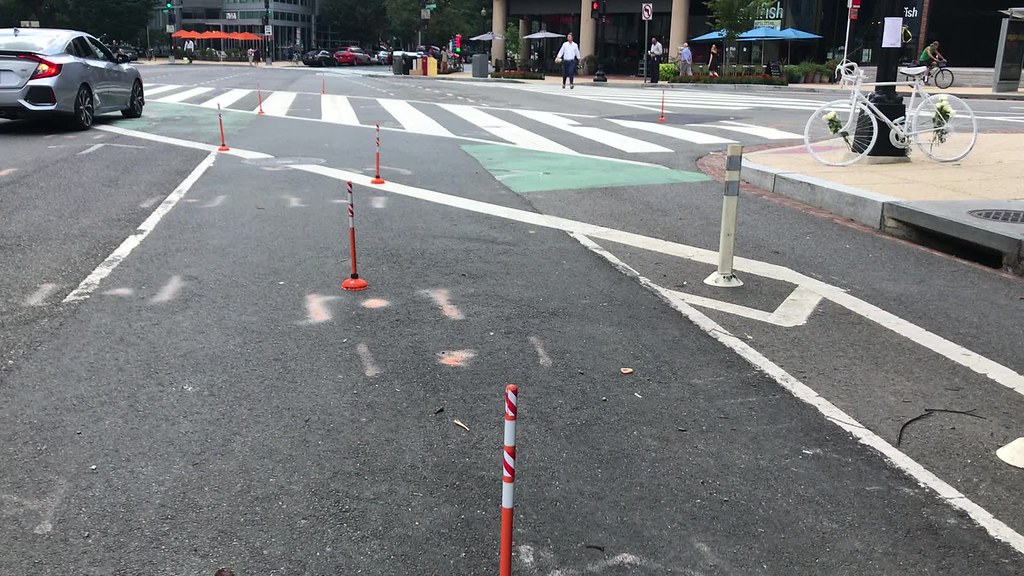 That’s the state of the city in 2018, in which people have to make their own traffic improvements to keep their neighbors safe. As I wrote in the Washington Post, Mayor Bowser and her administration care more about making rich people richer than helping ordinary citizens.

Last night, there was a memorial ride for Jeffrey Long. More than a hundred cyclists in white rode silently down M St during rush hour.

We stopped and placed our bikes on the spot where he died for twenty minutes of reflection. Flowers were placed on the white ghost bike that memorializes him. 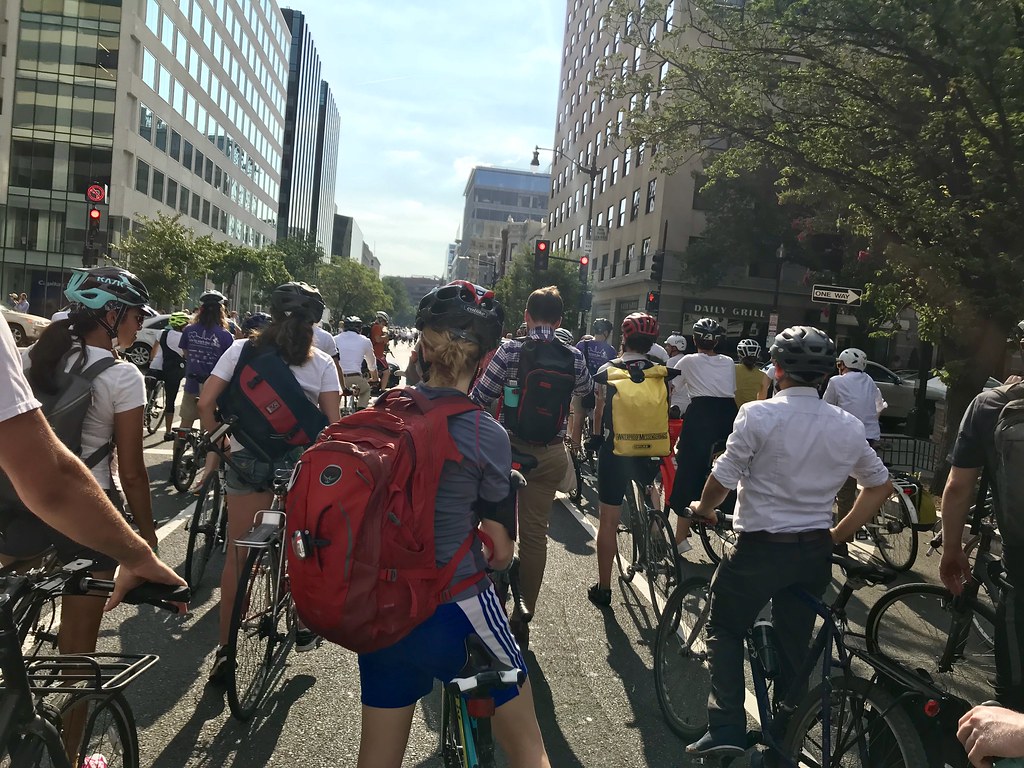 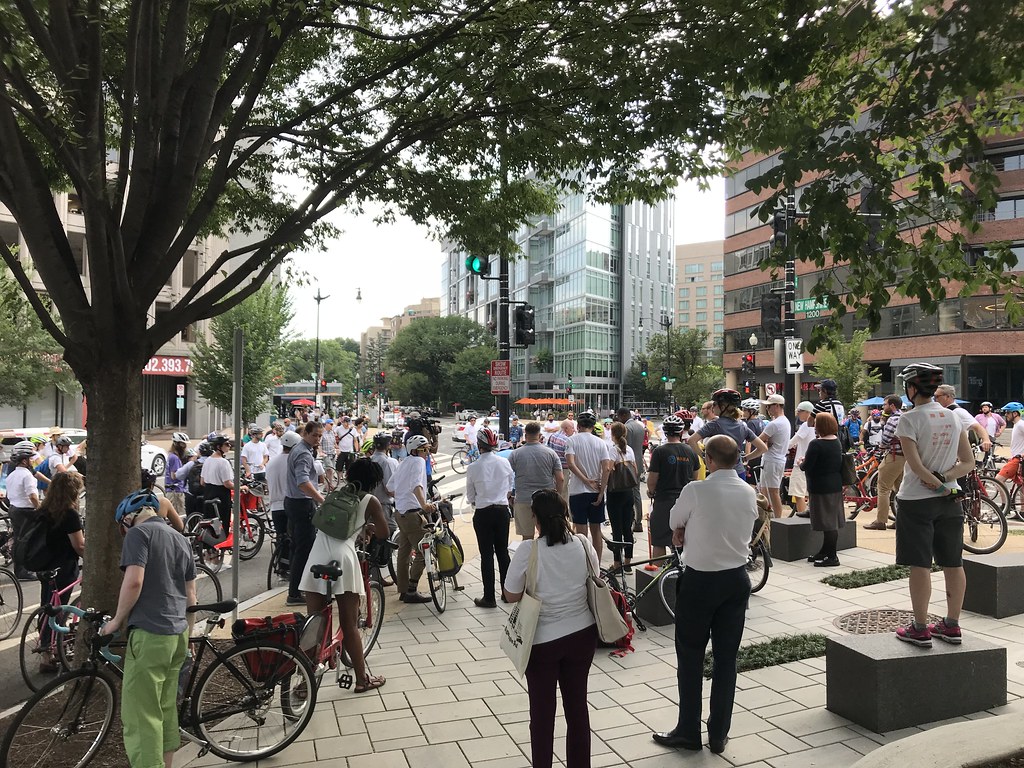 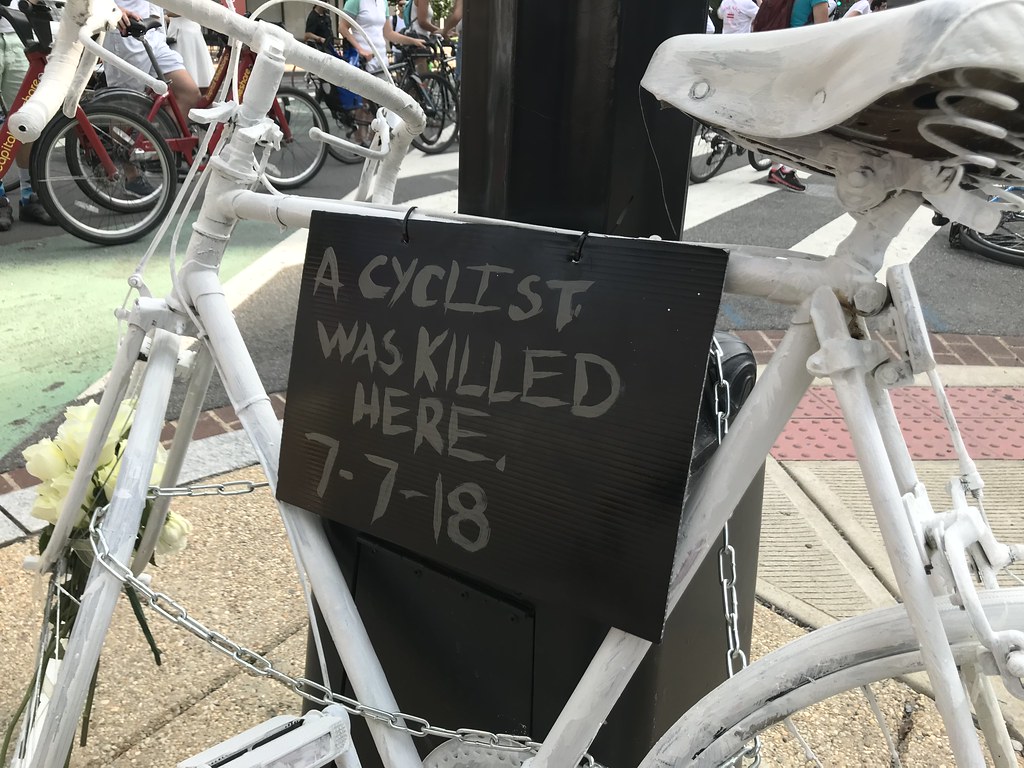 This can’t be the end. We are calling for:

This tragedy should not be forgotten. Contact your councilmember to ensure that this never happens again.

And follow #BikeDC on Twitter to learn the latest about biking in the city, as well as plans for an upcoming ride to honor Malik Habib.