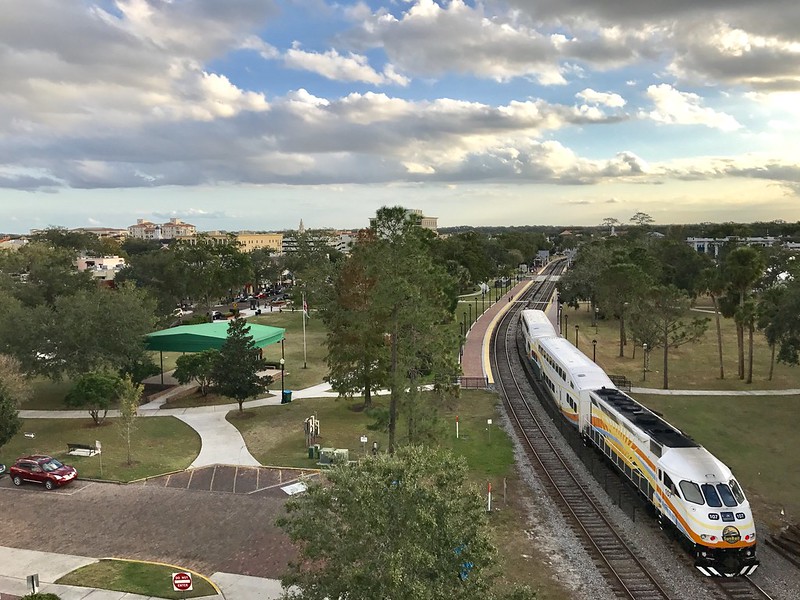 Bathed in light, I watched the cutest little bit of stimulus money creep into the green environs of Winter Park, FL. The station is tiny, and families waited along the palm tree-lined track to catch the three cars of the SunRail train. The destination was Orlando, five miles away. Driving (or even biking) would’ve been faster but this was some cheap fun for bored children a couple days after Christmas.

Kids love trains, as do most adults though they dismiss them as impractical. But if trains ran more often, and to more places, they would be practical.

Instead, we build roads. Near where my parents live, the state built a flyover at a suburban intersection, allowing traffic to soar on a concrete ramp twenty feet in the air, going from Red Bug Road to 436, one of those six-lane highways lined with fast food joints and gas stations that could be anywhere in America. In a car, you wait for the light to change, go under the massive flyover and then run into another traffic light.

After watching the train disappear into the verdant flatness of Florida, I drove to my favorite hipster coffee joint. I love how Orange Avenue meanders between Winter Park and Orlando, winding around lakes and passing lingering bits of Old Florida. Along the way is Foxtail Coffee, which makes a great cappuccino and has an outdoor seating area with fake grass and real palm trees. Next door, there’s a place for tiny, tortured salads and a local brewery. It’s about as Portlandia as Florida gets.

Foxtail is nine miles from parents’ place. Easily bikeable, where it not for the presence of six-lane roads like 436. The Google bike directions send you through the flyover.

In Orlando, people bike in subdivisions or they bike on trails but they don’t bike on roads, especially ones like 436. You don’t even see people walking along these suburban corridors.

There’s a tendency to think that this is the natural state of things, as if God ordained the car and America built a network of highways in response to his word.

I watched Secrets of Spanish Florida with the family. American history doesn’t begin with Jamestown but with St. Augustine in 1565, where Spain established a melting-pot colony of Europeans, Indians and escaped slaves. The first Americans were not Puritans, and the first Thanksgiving was not in Massachusetts. By the time the English got to America, the Spanish had been living here for decades. In La Florida, citizenship was available to all, no matter your race.

Perhaps if the Spanish remained in control, Florida would look like Spain, with high-speed trains and excellent ham.