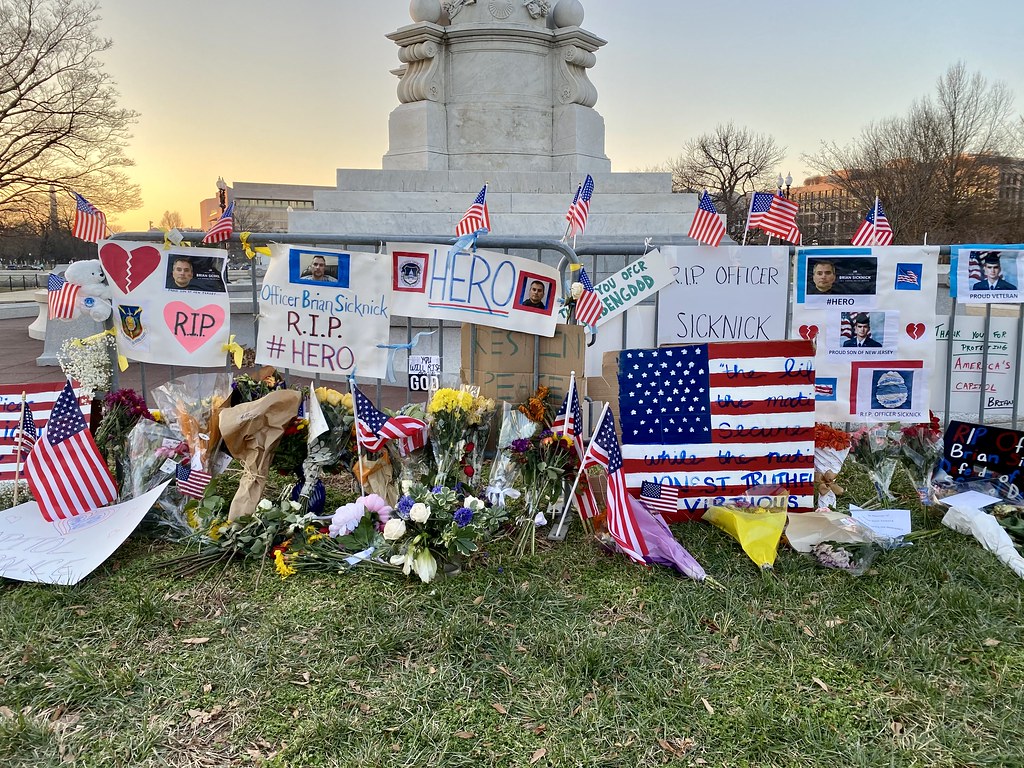 An eerie calm has descended upon Washington, DC.

A lot of my neighbors in my apartment building are gone – packages are piled up in front of their doors. Some left for good during the pandemic and others left for safety after the coup attempt.

The  building is noticeably quieter. In a big apartment building, you get used to a certain amount of noise – the ding of the elevator, the sounds of plumbing, people laughing over cigarettes in the alley or the distant thump of a neighbor playing bad techno as they prepare to go out.

I used to complain about it; now I almost miss these signs of life.

The streets are also darker. Last night, as I walked to the front door, I thought one of the streetlights must be out. It wasn’t. A lot of the apartments which face the street are empty, which means less light on the street.

Downtown DC is noticeably darker, with most of the hotels and restaurants still boarded-up.

Yesterday, I went to see the tribute to Officer Brian Sicknick, who was killed by pro-Trump rioters at the Capitol. He died in defense of liberty.

I did not take pictures of the security build-up around the Capitol and National Mall, not wanting to provide intelligence to MAGA terrorists; that’s something I think about now.

Away from the federal zone, life in DC goes on. I can still get scones at 350 Bakery, buy new books at Kramers and run around in the woods of Rock Creek Park.

The coup failed. Those that feared the Deep State are about to discover that it’s very real and will track down every last one of them.

I’m not leaving. It’s not just because Washington is now filled with thousands of police and federal troops.

But it’s because Washington is a beautiful city that belongs to everyone. We cannot let a mob take it away from us.

I’ll be home, like you, watching the Inauguration on TV. And then later I’ll go for a walk or bike ride around DC.

One thought on “The Calm After the Storm”