The 1776 Restoration Movement has fallen in love with Washington, DC, the city that they vowed to destroy.

Led by David “Santa” Riddell, a Proud Boy, and filled with January 6 rioters, the 1776 Restoration Movement (1776RM) is a right-wing cult that vowed to destroy DC. A remnant of the failed trucker convoy, they first threatened to shut down the city by blocking the highways; Washington was not impressed. They then rolled their motley collection of vehicles into the city, which they intend to occupy until the federal government was abolished and the clock rolled back to 1859 or so.

Instead, they’ve encountered a series of humiliations, from a desultory turnout for their marches to being trolled on their own livestreams.

You Can Always Go Downtown

Despite this, they’ve remained in the city. Why?

Because they’re having too much damn fun. If you watch them on their livestreams (they compulsively stream everything live on YouTube), you can see how much they enjoy life in Washington, DC.

You’re not allowed to camp on the National Mall. But because they’re a “protest” the Park Police have looked the other way.  The 1776ers sleep in their cars and monopolize the parking in front of the National Gallery of Art.

Imagine: sleeping for free in DC. Climb out of your car in the morning and enjoy a gorgeous view of the dew-soaked National Mall at sunrise. A couple of elderly ladies prepare breakfast for the group and all you have to do is endure a sermon from Santa. After that, take a stroll up to the Capitol and wave American flags around. 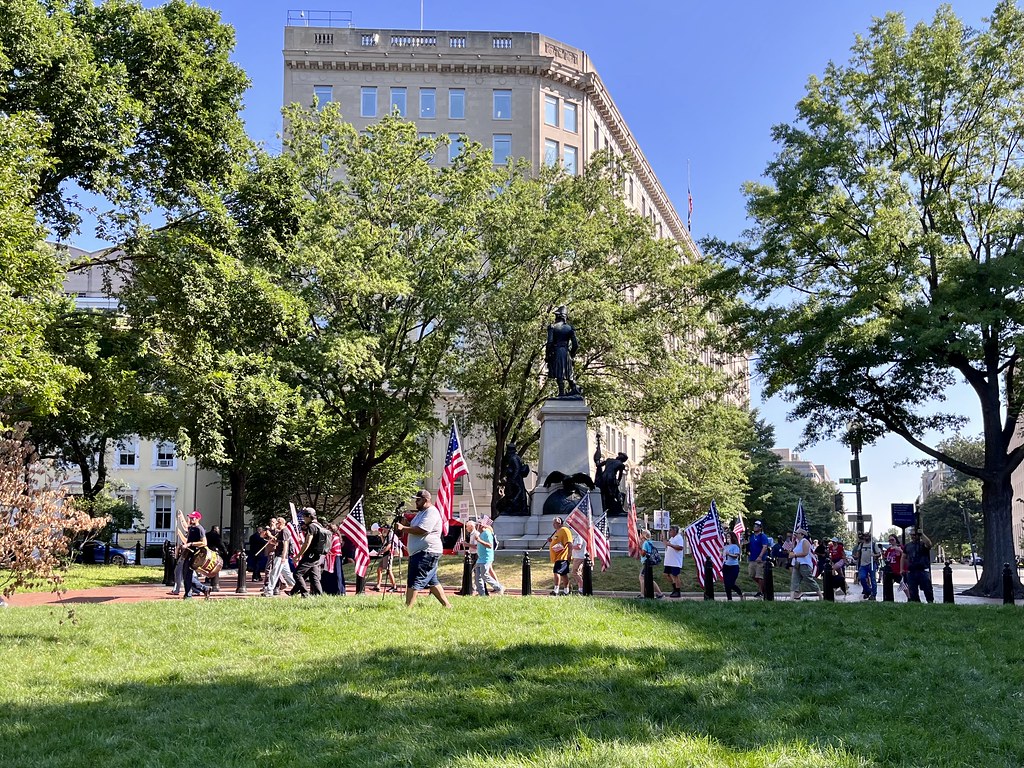 Afternoons are open. Pull your lawn chair into the shade and nap for a while. If you get too hot, get into your car and turn on the AC. Or maybe you rent a scooter and go to  theJefferson Memorial.

Hungry? Snacks are available from the coolers in the 1776RM encampment. There are also a number of food trucks nearby, offering gyros, tacos, chicken and burgers. There’s also a cafeteria inside the National Gallery of Art with a gelato stand.

But what about entertainment? If you like people-watching, 1776RM is for you. Camped out in their low-slung chairs, 1776ers watch a nonstop parade of runners, cyclists and tourists being active in DC.

Plus, the trolls! There’s always some drama going on in the 1776 Restoration Movement, from “antifa” protesters like Anarchy Princess coming by to roast the movement to incredibly complex, internecine feuds among various right-wing factions. It’s like Game of Thrones, but for fascists.

All this conflict means money for the livestreamers, who continually ask for “superchats” ($$ gifts) from their supporters watching at home. And nearly all the 1776ers are streaming, everyone pointing a camera at everyone else, to get their share of the grift.

Now, Santa is threatening to leave because they’re not getting enough people at the protest. They’re down to a dozen cultists.

But they can’t quit The Swamp. It’s way too much fun.

Why go back to ordinary life when you can have a free vacation on the National Mall? Enjoying a beautiful park, taking scooter rides around, getting tacos from a food truck – you can’t do that at home.

The hypocrisy is hilarious. Paul Krugman wrote in the New York Times about the city-loathing that animates Republicans.

Yet, as anyone who has traveled recently can confirm, cities are more popular than ever. Fox News says they’re super dangerous but Americans can’t stay away. In DC, there are lines down the block for museums, vast school groups posing for photos in front of the White House and dinner reservations are at premium. There is so much demand that I’ve been to coffee places that ran out of coffee and bars without beer.

Cities are where things happen. It’s where you go to start a new career, find a mate or just lead a different life. Cities are a collision of differences and out of those encounters spring new ideas that propel civilization forward.

The conservative critique of cities is preposterous. Without its cities, America would be poor and provincial.

Note too that Republicans hate cities yet choose to live in them, being ashamed of their passion for metropolitan life. They can’t stay away.

NEXT: The 1776 Restoration Movement is driven into exile.

5 thoughts on “The 1776 Restoration Movement Loves The Swamp”