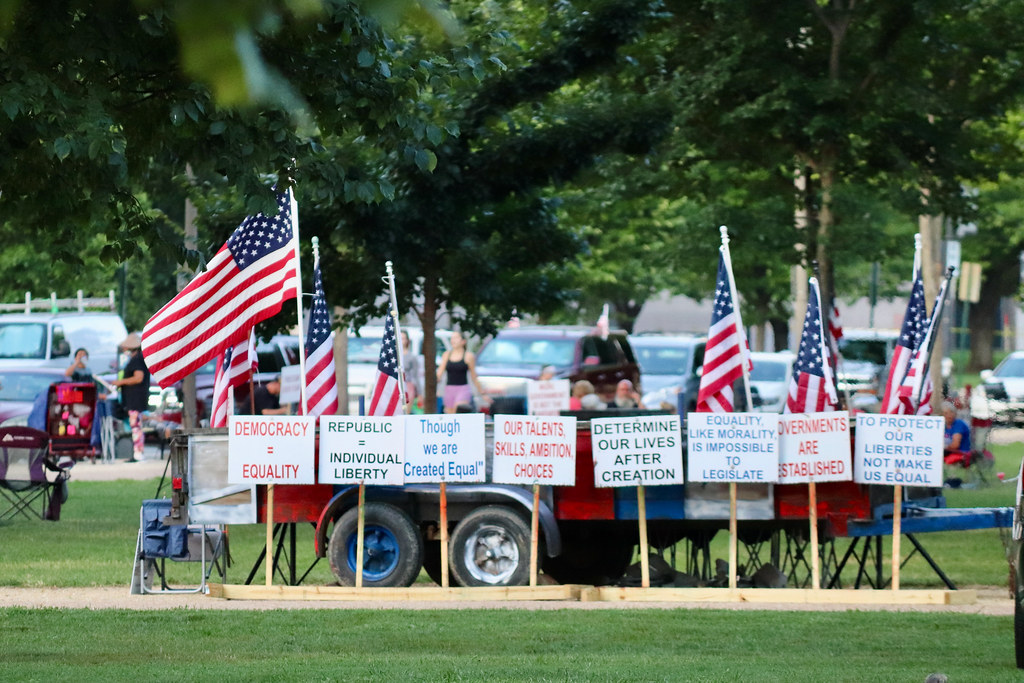 The 1776 Restoration Movement came to a dramatic end on August 3rd in Washington, DC.

It wasn’t the followers who deserted the leader but, instead, David “Santa” Riddell announced that he was leaving his own cult. Condemning their infighting and lack of discipline, he rose dramatically from his lawn chair to paraphrase Davey Crockett with the announcement that, “You can go to hell, I’m going to Ohio.”

After less than a month of protest in DC, it was suddenly over, as Santa picked up his chair and left, leaving his followers glumly and silently in the dark.

The Christofascist cult that was the 1776 Restoration Movement had failed. Who defeated it? Suspects include:

Life was easy on the National Mall for the 1776ers before the trolls arrived. The Park Police let them sleep in their cars and basically camp in front of the National Gallery of Art, in violation of park regulations.

Waking up in the morning, the 1776ers would climb out of their vehicles for a free breakfast as they enjoyed a spectacular view of the sun rising over the Capitol. There would be a brief “activity” like walking around with their anti-government signs and then they were free to sit and grift for money, live-streaming themselves sitting in chairs as the donations rolled in. Then more eating, a Santa lecture, karaoke and to bed in their air-conditioned cars.

While they had been trolled before by counterprotesters, they were not prepared for the unholy alliance of Defender of Ants and Anarchy Princess. Circling the camp in a van, Defender sang, “This is how legends are made” before assailing the 1776ers individually with specific and personal insults. A veteran of the People’s Convoy, he knew and hated the 1776ers for the unforgivable sin of sheltering  sex offenders in their group.

Santa knew he had violent pedophiles in 1776RM but he justified keeping them in, claiming that he knew best. He would not renounce or expel them.

Anarchy Princess, from the left of the political spectrum, was a figure so triggering that all she had to do was walk by the 1776 camp to get them in an uproar. They believed that she was a witch (“witchtifa!”) and blamed her when one of their cars caught on fire.

Rounding out this Suicide Squad (how they referred to themselves), were additional convoy veterans like Jersey Jay, Freedom Squirrel and Lori Arnold. They hated Santa and his squalid cult for turning their freedom movement into a joke, referring to the 1776ers as the “1776 Retirement Movement.”

The night belonged to them. The 1776ers could not stand their nonstop mockery and begged the Park Police to do something about it. The Park Police set up a designated protest zone, where Defender and friends yelled insults for hours, ensuring that the 1776ers got no sleep.

On the final night before the cult dissolved, Santa said, “I can’t fight you and the government.”

Meaning that managing the lazy, entitled and hotheaded members of the movement was an impossible job, like herding cats, but some of the cats were religious zealots while others are drunken felons. All were incompetents, easily triggered by trolls and constantly falling prey to scams.

Under pressure from the counterprotesters, one of Santa’s “security team” attacked Defender and was arrested. Another one assaulted one of their own livestreamers – an ally of the movement. The 1776ers tried to intimidate their critics by zooming out of darkness on rented scooters, everyone yelling, shouting “Scootertifa!” and live-streaming themselves, with the police trying to keep people apart, like an episode of Reno 911 but set on the National Mall.

On the final night, the 1776ers abandoned their “back the blue” beliefs to turn on the police, demanding badge numbers and threatening to take the law into their own hands. It took a dozen officers to keep the 1776ers from attacking four counterprotesters who were merely shouting insults from across the park. 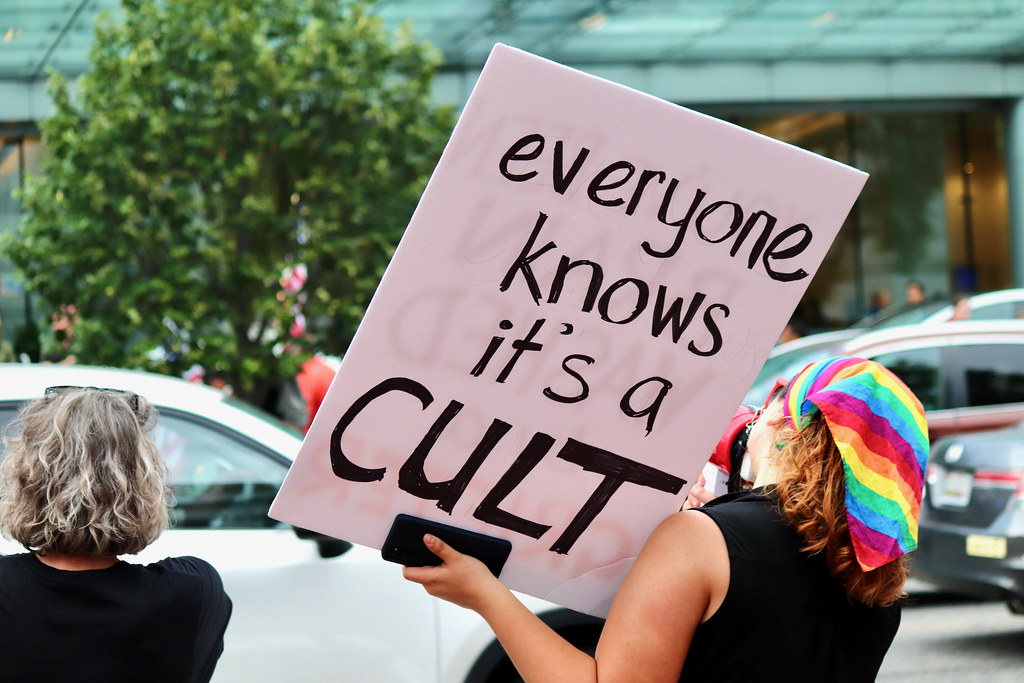 The one group that ever harassed me was the 1776 Restoration Movement.

“Hello, Joe,” was all it took. A counterprotester said hello to me and suddenly all the 1776ers swarmed around me and blasted a bullhorn in my face. Individually, they are uninspiring, but together they make a dangerous mob.

They acted like the street and “lawn” in front of the National Gallery of Art belonged to them. While they had a permitted spot for demonstrations, they preferred to hang out in the shade near their vehicles. All day they sat there and filmed people they deemed suspicious. “Possible antifa,” they’d say on their walkie-talkies as a tourist walked by their encampment.

Santa created a red-shirted security team to patrol “their” area. At night, they would hide behind trees and follow women around.

They had an enemies list and they doxxed and swatted people they didn’t like, revealing their personal information online and telling the police that they were going to harm themselves.

When the NPS permit came up for renewal, complaints poured in from the people of DC. Topics included their creepy Gestapo tactics, sleeping on the Mall when no else was allowed to, their unsanitary food preparation, their gas cans and piles of garbage, the pedophiles, the kids and dogs they had in hot cars and the fact that they were J6 insurrectionists.

The Park Police then announced that they would enforce the ban on sleeping in cars at night on the National Mall. If the 1776ers were caught sleeping in their cars, they would be arrested and their vehicles would be towed.

This action struck fear into the heart of the 1776ers. Their cars are everything to them, not just transportation but also their homes. They have everything in them – food, clothes, personal items. Without their cars, they are mere pedestrians.

Vehicles are both the strength and weakness of the convoy movement. A dozen people marching is unimpressive; but a dozen vehicles in a convoy is menacing.

If your town is overrun by a convoy, threaten to tow their cars. They will leave.

Who Defeated the 1776 Restoration Movement?

I’m going to say the trolls, who put intolerable pressure on the 1776ers causing them to crack. Who knew mockery was so powerful? You have to love an underdog story, too.

And that people from completely different political backgrounds could come together in common cause is remarkable in this divided time.

I never thought I’d talk amiably with someone in a MAGA hat on the National Mall but that happened. One afternoon, I talked to the trolls, asking them about the People’s Convoy, why it broke up and what happened to the people who were in it (moved on to similar causes). They asked me about what I thought about the 1776ers and we bonded over our shared hate of the layabouts.

The 1776 Restoration Movement did bring people together, but not in ways that they expected, uniting enemies on the right and left and bringing them together in conversation.

3 thoughts on “Who Defeated the 1776 Restoration Movement?”