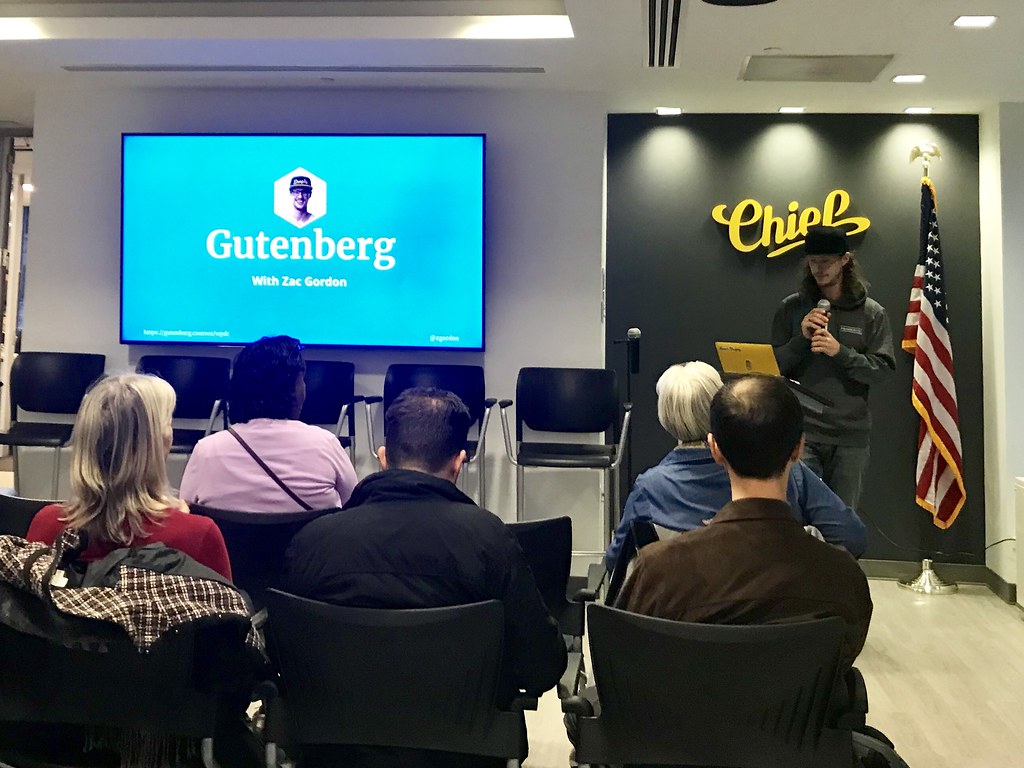 A new publishing experience for WordPress: get ready to make your words, pictures, and layout look as good on screen as they do in your imagination, without any code.

Named after the inventor of the printing press, Johann Gutenberg, this new WordPress editor is a response to drag-and-drop page builders like Wix and SquareSpace, giving users more flexibility in how they design their pages.

Gutenberg takes the wonderfully blank canvas of the current WP editor and turns content into blocks. Text and images become blocks that can be dragged around on the page and reused on other pages as well.

I was skeptical. My experience as a Web Editor has been that content management systems (CMS) only get worse over time. I’ve seen sites go from neat collections of Dreamweaver pages to inscrutable Drupal beasts that require weeks of training to understand – and still don’t work.

When I heard that the graceful WordPress that I love, with its mantra of the user is always was right, was changing, I was alarmed – especially when I heard talk of blocks. One shouldn’t have to learn a new vocabulary, like Drupal’s use of nodes, just to write a blog post.

My fears were allayed at the recent WordPress DC Meetup on Gutenberg. Zac Gordon, who teaches WordPress, previewed the new CMS.

Once I saw that the freeform editor that I love would be largely unchanged, I was relieved. I could write the way I want in the editor and turn my paragraphs into blocks, later, if I wanted to, and drag them around on the page.

“Convert to a shared block” is a useful feature, too, for page elements that you want to use elsewhere. I could see myself creating a shared block of text to promote my novel, The Swamp, across my site.

You can also get into the HTML of the blocks in case something isn’t displaying correctly. A little bit of HTML knowledge is still necessary in this CMS age.

Moreover, the page builder in Gutenberg has features that I like – the way it handles images is far superior than the current editor. On my site, I embed photos from Flickr in posts because that’s easier than WP’s image management and display capabilities.

In contrast, Gutenberg allows you to easily move images around the page, create photo galleries and make photos full-width across the page. A “hero image” according to Zac.

Try it out for yourself with a live demo of Gutenberg. Type content, move images around, reorder blocks and get a taste of new WordPress.

In contrast to other CMS, the WordPress upgrade is designed to work with the rest of your plugins. Users, like me, who haven’t done a lot of customization probably won’t even notice the change on their sites. Backward compatibility is a key WordPress principle.

If your site is hosted by someone else, you probably won’t have to do anything to upgrade, according to Zac. If you’re a developer who has done a lot of CSS customization, you’ll want to edit and experiment in a staging environment before upgrading.

Also, a “classic editor” plugin will be available for users who don’t want to change.

WordPress for the Future aka Gutenberg has no release date yet. But it’s coming soon, developers say.

While the WordPress will not be as revolutionary as Johann Gutenberg’s invention of the printing press, that’s a good thing. Broad, sweeping changes are to be feared, in societies and content management systems.

With Gutenberg, expect a gentle upgrade that helps users get their ideas on the web without having to learn a line of code.