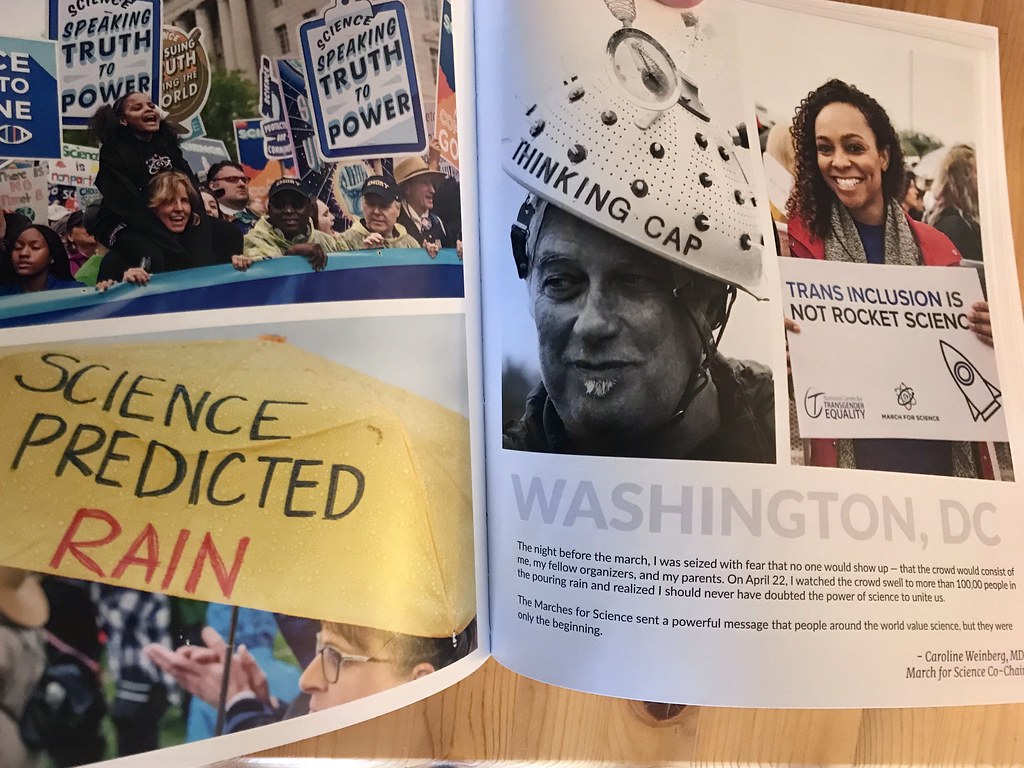 I have a photo in this beautiful book from MIT Press! Science Not Silence celebrates last year’s March for Science with stories and photos from around the world. More than a million people came out to support science, in cities across America and around the world.

My photo is the guy in the thinking cap. Heading down to the march in Washington, DC, I didn’t know what to expect. The weather was terrible – it had rained all day. Would people even show up? But when I approached Constitution Avenue, I heard a dull roar. Crowds stretched in both directions, from the Lincoln Memorial to the Capitol, a half-million people joyously marching, singing and chanting.

I was proud to support the cause. I’ve spent a career working with scientists, helping to communicate their achievements at The Nature Conservancy and NOAA. What makes science different than other professions is that it’s not just a job, it’s a life. You are a biologist or an oceanographer or a chemist – it’s not just something you do 9-5.

It’s inspiring to be around that kind of passion. After my NOAA experience, I wrote a novel, The Swamp, that features a meteorologist as a character. He has to send his employees home after their shifts, otherwise they would hang around the forecast office:

weather being as much an obsession as a vocation and one that they would abandon only upon death.

That’s the kind of dedication I’ve found in the sciences.

At the march, there was so much to see – women dressed as Klingons, people in dinosaur suits and countless hilarious signs grown soggy from steady rain. I captured the photo of the guy in the thinking cap toward the Capitol, where the crowds began to thin. I liked his expression.

I had been out for an hour, zipping around the edges of the massive demonstration on a bright red Capital Bikeshare bike. Despite my raincoat, I was cold and wet. The thinking cap photo was one of the last I took before I left to get warm.

“Science predicted rain,” read one sign. The forecast came from a National Weather Service meteorologist, a government employee and a scientist, which must enrage the red state know-nothings who believe that they can live in some kind of lawless, free fire zone of ignorance.

The rain fell on everyone – marchers, tourists, photographers. Like science, it was non-partisan. Like science, you can deny it but that doesn’t change the fact that you’re soaked.

Science Not Silence: Voices from the March for Science Movement is available from MIT Press.