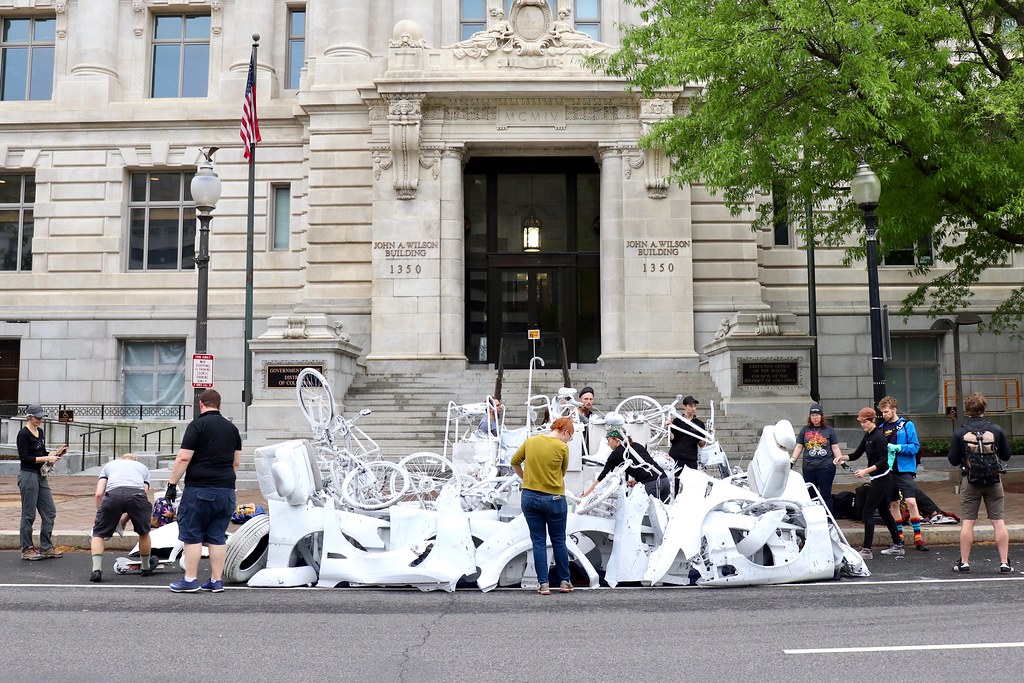 The conspirators gathered at dawn. Working quickly, they unloaded the truck on Pennsylvania Avenue.

Out came bikes, walkers, canes, shoes, helmets, scooters and car parts – all painted white. It was ghost memorial for the 128 victims of traffic violence in Washington, DC. 128 men, women and children killed during the administration of Mayor Muriel Bowser.

These were the Ghosts of Bowser.

A How-To Manual for Conspiracy

Conspiracy by Ryan Holiday outlines how conspiracies form, organize and succeed as he tells the story of Hulk Hogan’s lawsuit against the gossip web site Gawker.

Conspiracies begin with a crime. An outrage. An offense that people can’t bear, something that makes them willing to leave their ordinary, conspiracy-free lives behind and sacrifice to right the wrong.

For the members of #BikeDC, the rolling community of people who bike in the nation’s capital, it was the death of Dave Salovesh, killed by a driver on Florida Avenue. Plans to redesign the street to make it safer for cyclists and pedestrians have been on the books for years, yet the city has done nothing. A protected bike lane might have saved him.

In response to his death, a ghost bike was installed on Florida Avenue. A bike painted white to memorialize his death.

This wasn’t enough. Dave was a beloved figure, someone who everyone in DC knew – including me.

Two days after he died, another person was killed by an out-of-control driver in DC. Abdul Seck, visiting Washington, struck on a sidewalk.

While memorials were held for Dave and Abdul on the streets where they were killed, the Mayor attended neither.

A Conspiracy is People Working Together

I yelled at the Mayor. Caught her at an event on K St. Confronted her over her failure to fix Florida Avenue – she said these things take time. Over her failure to respond to the more than 100 people who emailed her. Or to show up at Dave or Abul’s memorials. She replied that too many people were killed in DC for her to make an appearance at every memorial.

Me. An individual expressing my rage.

But to the move the world, you need a group of people acting in concert. A conspiracy.

As Americans, we think that conspiracies are a bad thing, forgetting that our country was formed in conspiracy, 13 colonies acting against the Crown.

“When they go low, we go high,” is a sentiment that the men who fired the first shots at Lexington would’ve found hopefully naive. If you want independence, then you have to act in secret using every tool available.

Fortunately, we have better communication methods than Paul Revere riding in the dark. Modern conspiracies are organized by time-expiring emails and password-protected Google Docs.

Days before the Ghosts of Bowser installation, teams of people scoured the city for objects to represent the deaths of 128 men, women and children killed in traffic violence. From junk yards, garages and alleys, they emerged with car parts, bikes and shoes that they painted white. A conspiracy requires a village, a large group of people who share your outrage and desire for change.

Secrecy is the essence of conspiracy, from the classical era to today, as Holiday points out in his book. Roman slaves were rewarded for informing on their masters. If the city had learned of Ghosts of Bowser before it was constructed on Pennsylvania Avenue, they might have stopped it.

Modern conspiracies, like Ghosts of Bowser, must balance secrecy with the need for outreach. You want the media to show up at your protest. Ghosts of Bowser had talking points, artwork and a hashtag #ghostsofbowser ready to debut on social media.

Reporters, and allies like me, were told to expect something in front of the Wilson Building, without being told the exact details.

In the light of dawn, as the Ghosts of Bowser installation was taking shape outside the Wilson Building, home to the DC city government, a pair of security guards emerged.

The volunteers, busy piling white bikes and strollers into a parking space marked for councilmembers only, knew what to do. They had been briefed. There was a script for descalating conflict with the police.

Which was not necessary. The guards just didn’t want bikes on the steps of the Wilson Building, where they might trip people up, a request that was easily accommodated.

A Conspiracy Has a Clear Goal

Conspiracies need a clear goal. For Peter Thiel, offended that Gawker had outed him as gay, the objective was to bankrupt the gossip site.

Conspiracies also need people willing to do whatever it takes to win. Thiel found that in Hulk Hogan, whose sex tape Gawker exposed to the public. He would be the instrument that Thiel would use to get his revenge.

#BikeDC wants streets that don’t kill people in DC. You shouldn’t die riding your bike or walking down the street in Washington. The city has plans to implement safe streets but has failed to act upon them. Protected bike lanes, road diets, banning right-turns on red and reclaiming streets for the people all could save lives, if only Mayor Bowser would act.

Often conspiracies exist within broader movements for change – think of the network of spies that Alexander Hamilton ran during the American Revolution. 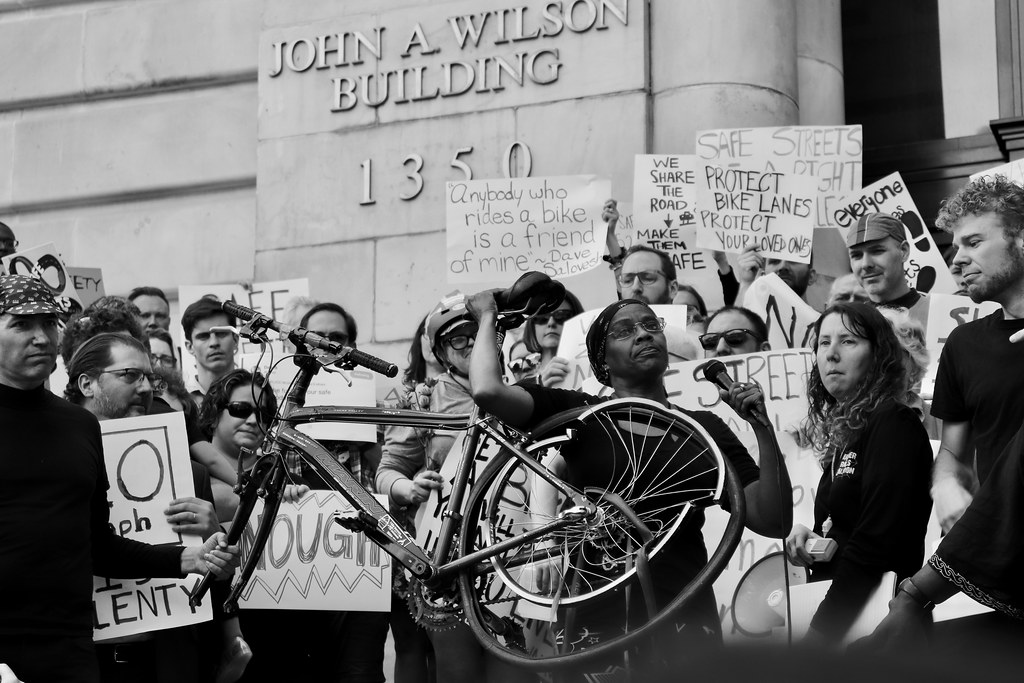 Hours after the ghost installation, the Washington Area Bicyclists Association held a die-in on Pennsylvania Avenue. As the names of 128 traffic victims were read, hundreds of people lay down on Pennsylvania Avenue. Every member of the “transportation community,” as Mayor Bowser would call it, was there – bike commuters, casual cyclists, walkers, runners, environmental activists and their friends and family.

“All eight wards” is a slogan Mayor Bowser uses to represent the entire city. It was right outside her window that day, if only she would look. This is a community ready to do what it takes to build safe streets in the nation’s capital.

Conspiracies Have a Cost

Conspiracy has a cost. The signers of the Declaration of Independence pledged their lives, fortunes and sacred honor, knowing that they had committed treason. There was no going back.

Peter Thiel won his battle against Gawker, after spending millions of dollars and years of his time. Aiming to protect his privacy, he ended up with even worse press, as his role as the banker behind the Hulk Hogan lawsuit was exposed. Believing that he now understood the common man, he went on to endorse Donald Trump at the 2016 Republican Convention. Thiel has lost his privacy and his reputation, becoming just another Republican tarnished by Trump.

That’s the point Ryan Holiday makes in Conspiracy – the endgame is the most dangerous part of a conspiracy.

Confronted with evil times, from Donald Trump pushing America toward dictatorship to the deadly traffic toll on DC’s streets, we need to conspire to make change.

The good guys don’t always win. The long arc of history does not bend toward justice, it is pushed and prodded that way by people acting together in conspiracy.