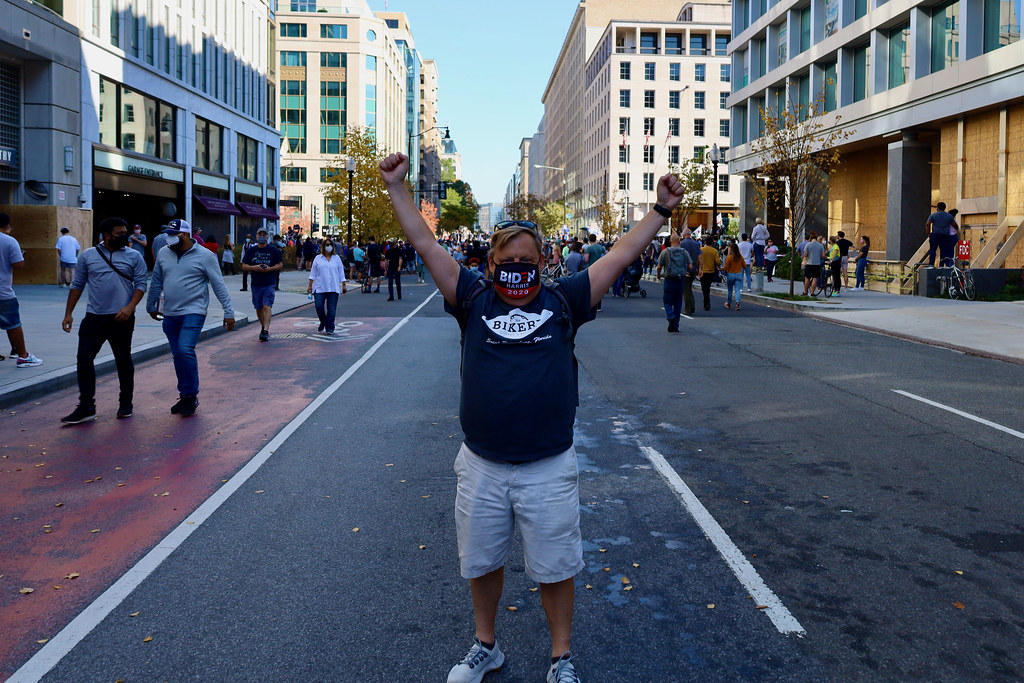 With the blast of a boat horn, I found out that Joe Biden had been elected President on November 7th.

I was outside at The Wharf, the luxury development at the old fish market. I heard a horn. And then again, insistent blasts echoing off the blue waters of the Washington Channel.

I checked my phone: CNN and then the rest of the networks had declared that Biden had won.

For a few minutes, I seemed to be the only one aware of the news. I stood up on a bench and screamed, “YES!” No one paid any attention to me. 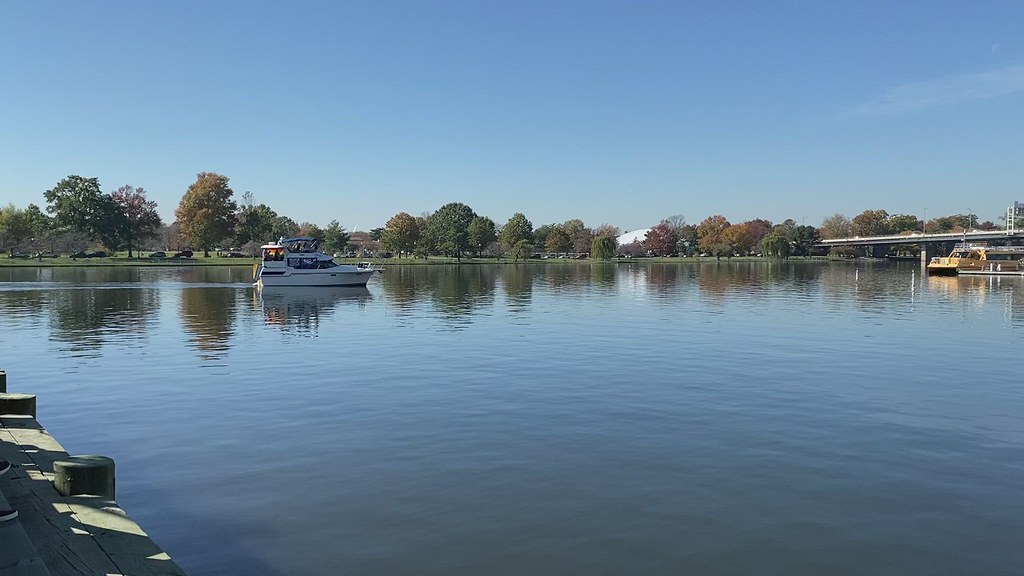 And then, rounding the pier, a boat motored into view, the one that had been blasting its horn. Decorated with Biden and gay pride flags, they were celebrating with song.

“We are the champions, my friends…” drifted across the water. Everyone now had the happy news. A cheer went up from an outdoor spin class on another pier.

It was Saturday afternoon and the city was in happy chaos. I was wearing a Biden-Harris mask, prompting  yells of celebrations as people passed me.

Hopping on bikeshare, I could only make it as far as Constitution Avenue before the crowds got too thick. The police hastily blocked off 17th Street as the people took over the streets. Behind their fence, the Secret Service watched as a man paraded back and forth with a baby Trump balloon.

By the time I got to Black Lives Matter Plaza, it was celebration time as crowds poured in from all directions. 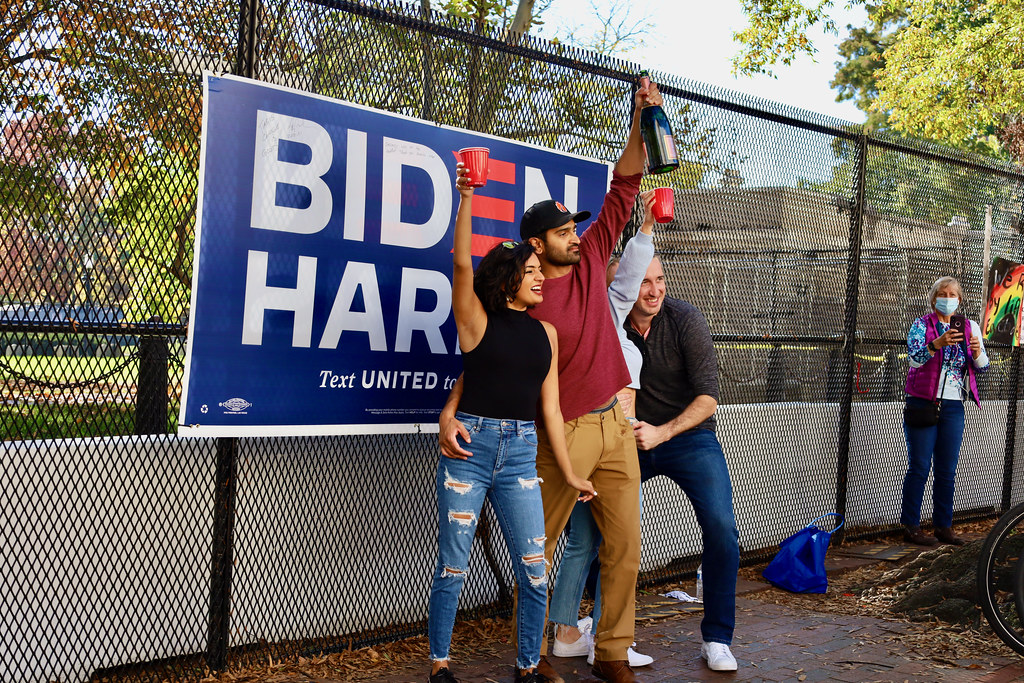 People drank champagne on the spot where Trump, just a few months ago, had people beaten for a photo-op. Now the people were toasting their victory over him.

It was over. This city of Washington, where I had witnessed the Women’s March, the first stirrings of protest, the closure of Lafayette Park, an invasion of paramilitaries, helicopters flying by my window, the pandemic shutdown and far too much history in one year to absorb without breaking – and it was over.

I met my friends Carlo and Flo. We took photos of ourselves with the cheering crowds on Black Lives Matter Plaza. A man stood on a bus shelter waving his shirt around and threw it to the crowd. A home-made sign read: Victory for America. A huge roar rose up from the street, the sound of thousands celebrating as one.

We went in search of a drink. At Farragut North, there was a parade of vehicles, a happy gridlock, cheers echoing through the glass canyon of office buildings on Connecticut Avenue. 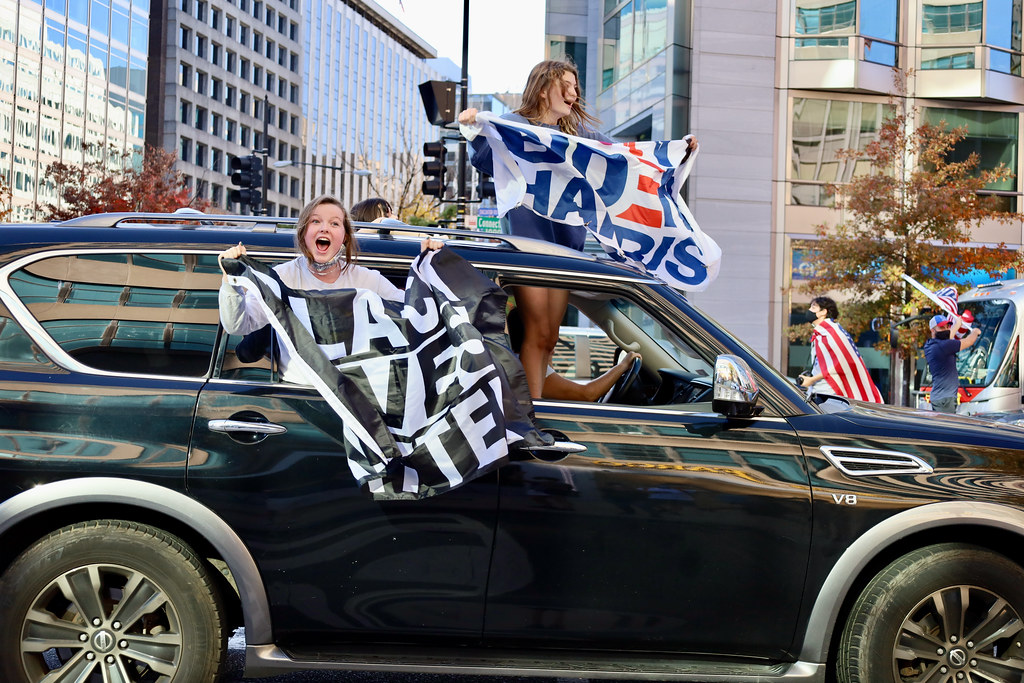 There’s one tiny liquor store nearby. I had never seen anyone in it but that day it was mobbed with people. All the champagne was sold out.

I bought myself a giant can of Fosters and walked down the sidewalk with it, swigging from the beer can. We saw a guy with a parrot on his shoulder. A man with a portable speaker leading a line of dancing people. Cars waving Biden-Harris flags.

We walked to Zorba’s by Dupont Circle. That block of 20th Street is closed to traffic for a streatery, with outdoor tables for several restaurants. Every time a group of people walked by with a Biden flag, a huge cheer rang out from people sitting outside, an entire block standing up and applauding. 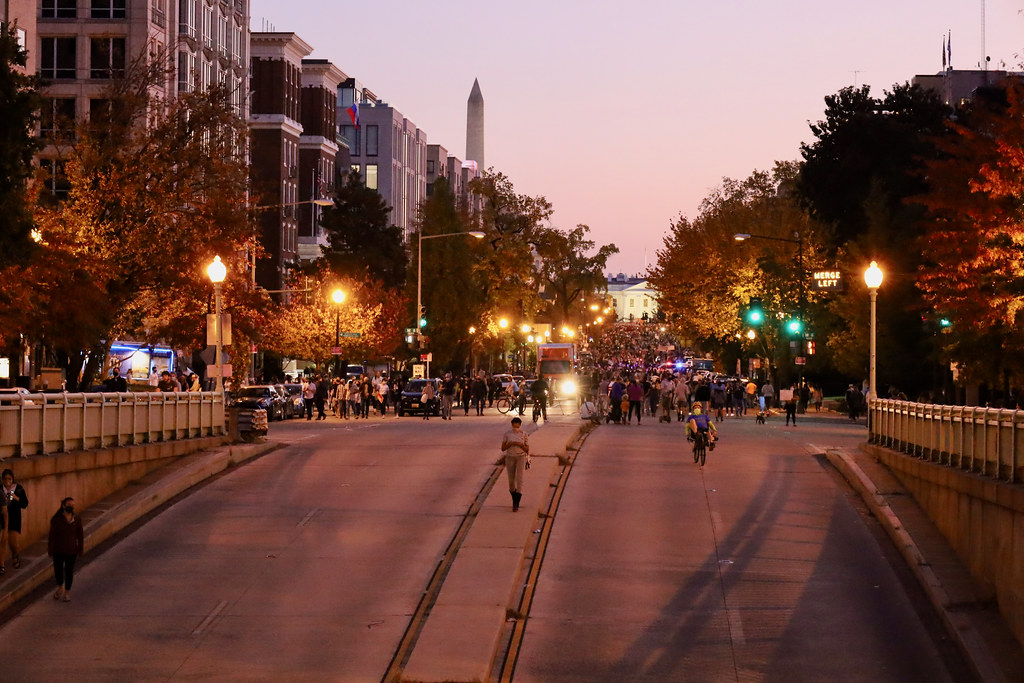 And it was the kind of day you didn’t want to let go. After Carlos and Flo left, I walked back to my apartment. Stopping at Scott Circle, I could see vast crowds down 16th Street, stretching all the way to the White House. Cars, bikes and scooters navigated the circle, horns and bells ringing everywhere.

The horns went on all night. I didn’t mind. We won.